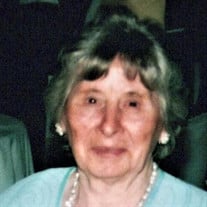 Mrs. Irene Baczek, of Pittsfield, passed away on Saturday, March 14, 2020 at the age of 95 at Berkshire Medical Center following a brief illness. The daughter of the late Juzef and Stanislawa Sochacki, she was born in Bydgoszcz, Poland, on January 14, 1925. During World War II, as a young girl, Irene was forcefully separated from her family in Poland and was sent to Germany, where she was enslaved to perform forced labor for many years. Irene escaped near the end of the war and after many months, with the help of a Polish soldier, returned home to her mother, father, and brother. She later met and married Ludwik, who was a concentration camp survivor. Irene immigrated to the United States in 1966 to join her husband and children who came to the United States two years prior, in 1964. Her immigration to the US was delayed due to travel restrictions that were enforced by the Russian Communist domination of Poland. In Poland, Irene worked as a seamstress where she sawed military uniforms. Later, in the United States, she worked in the metal machining and the plastic molding industries. She enjoyed gardening and had a great appreciation for wildlife, whether it be the mountains, lakes, or open spaces. She was also fond of car rides with her son. When given the choice, Irene would always take chocolate ice cream over vanilla! Irene was a member of the Holy Family Church on Seymour St. in Pittsfield until its closing day. Over many months, Irene made a lot of new friends at Lee HealthCare, whom she grew to love dearly. She not only enjoyed, but also looked forward to the daily recreational activities they offered. Irene was predeceased by her beloved husband, Ludwik Baczek, who passed away in 1993. She is survived by her daughter, Elizabeth Jurkiewicz (John McKee), and her son, Richard Baczek (Susan Edwards). She leaves behind her grandchildren, Jeff and Ryan York, and Joan and Amy Baczek, as well as two great great grandchildren. Funeral Notice: Funeral Services for Mrs. Irene Baczek will be Friday, March 20, 2020 at 12 noon at the Dwyer Funeral Home with the Rev. Dr. John Tuohey, Administrator of St. Charles Church, officiating. There will be an hour of visitation at the funeral home prior to the service from 11 a.m. until 12 noon. Burial will follow at Pittsfield Cemetery. For those who will go to the cemetery only, please meet at the Dwyer Funeral Home parking lot by 12: 20 p.m. to join the procession to the grave site. In lieu of flowers, donations can be made to Elder Services-Meals on Wheels in care of the Dwyer Funeral Home, 776 North Street, Pittsfield MA 01201. Donations CANNOT be made online, but may be made through the Dwyer Funeral Home.

Mrs. Irene Baczek, of Pittsfield, passed away on Saturday, March 14, 2020 at the age of 95 at Berkshire Medical Center following a brief illness. The daughter of the late Juzef and Stanislawa Sochacki, she was born in Bydgoszcz, Poland, on January... View Obituary & Service Information

The family of Mrs. Irene Baczek created this Life Tributes page to make it easy to share your memories.

Mrs. Irene Baczek, of Pittsfield, passed away on Saturday, March...

Send flowers to the Baczek family.