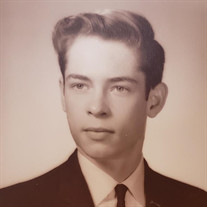 Mr. James Robert “Beetle” Bailey, of Windsor, passed away after a long battle with Juvenile Diabetes on Friday, March 12, 2021, just shortly after celebrating his 75th birthday. Born in Pittsfield, MA, on February 9, 1946, the son of the late Lyle “Banjo Bob” and Pauline Traver Bailey of Dalton, he graduated from Wahconah Regional High School in Dalton, MA and later attended classes at Berkshire Community College in Pittsfield, MA. Shortly after school, Jim enlisted in the United States Marine Corp, where he proudly served as a Sergeant and Rifle Marksman at Camp Lejeune from 1963 until 1971. Following his time in the military, he worked as a stock-keeper, Coffee Club Manager, and as a machinist for 39 years at General Electrics and General Dynamics in Pittsfield. Jim was active in his community. He was a member of the Numismatic Club of the Berkshires, the Windsor Council On Aging, as well as proudly having been a sponsor in the Alcoholics Anonymous organization Among many things, Jim enjoyed woodworking and carpentry, coin-collecting, upholstering furniture, gardening, drawing, creative writing and bowling. He loved playing Pitch with a good group of “Windsorites”, as well as watching “Gunsmoke”. He was passionate about any kind of socializing he could partake in, including traveling to the town dump to chat with other folks and taking almost-daily trips to Stop-n-Shop to wander the aisles to see who else he knew that he could talk to. Every pet that Jim owned was just as much a part of his family as any human was. Though any person who knew him could see how he adored animals, his love for them was especially clear to the neighborhood dogs, who were beyond certain they would be spoiled every time they paid a visit! Jim was kind and warmhearted. He could make anybody laugh, whether it be a chuckle following a joke he told, or a snicker (with an eye roll to follow) from a prank he was pulling. James is survived by his beloved wife who more than willingly withstood—and enjoyed--his antics for 53 years, Judith Ann Bailey, whom he married on September 23, 1967. He leaves his two beautiful, smart, funny and talented daughters (who may or may not be the authors of this obituary) Sharon Anne Bailey Sharry and her husband, Michael Sharry and Jim’s favorite granddaughter, Molly Ann Sharry, residing in Bernardston, MA and Suizee Pauline Bailey and her spouse, Barrett Erwin, residing in Auburn, MA. He leaves his dog, Turner, as well as his grand-dogs, Ezekiel “Zeke” Elliott, and Chewbacca, and his grand-cat, Neko. He is also survived by his wonderful sisters, Carol Gardner, Pauline Wheeler and Kathy DiOrio, and numerous nephews and nieces who were all his favorites. Whenever Jim and his family were together, it was not only a blast for them, but also for all who were around, as their love and energy emitted was always contagious! Jim is also survived by the countless friends of his daughters, whom he would give nicknames to like Becky-pook, Big Foot, Nickle and Potato-head, welcoming each into his home without question, caring and loving them as if they were his own. In addition to his parents, Jim will now be reunited with his dogs, Gizmo, Keebler, Pandora, and Hooch, with whom he has already begun playing another game of fetch. In Jim’s own words, “A man has lived a wealthy life [when] at his grave side, an army of friends gather to shed a tear, knowing that he will be missed. Loved ones, whether blood kin, intimate friends, co-workers or passing acquaintances, are the true wealth of this world; and that kind of wealth is immeasurable” (~excerpt from BCC English Comp assignment of Jim Bailey, May, 3, 1983). While Jim will be sorely missed by all of us who were blessed to have known him, we are at peace knowing that he did, indeed, live nothing short of “a wealthy life”. Funeral Notice: Funeral services for Mr. James Robert Bailey will be private. For all of those who would like to virtually attend, please visit the following link ( http://www.dwyerfuneral.com/obituaries/permalink/9892445/LTWebcast ) on Tuesday, March 23, 2021 at 11 a.m.. A public celebration of his life will be held at a later date, when Covid restrictions are lifted and all can safely gather. In lieu of flowers, donations can be made to the Eleanor Sonsini Animal Shelter in care of the Dwyer-Wellington Funeral Home, 525 Main Street, Dalton, MA 01226, in his memory.

The family of Mr. James R. Bailey created this Life Tributes page to make it easy to share your memories.

Mr. James Robert “Beetle” Bailey, of Windsor, passed away after...

Send flowers to the Bailey family.