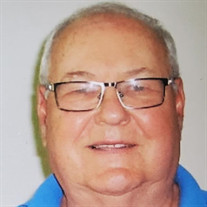 James J. Chanen, 80, of Pittsfield, passed away peacefully on Sunday, July 19, 2020 after a short illness. Born on March 29, 1940, Jim was the son of Nicholas Chanen and Anna Novitski Chanen, both of whom emigrated from Poland as children. He was proud to be from Pittsfield and was a graduate of Pittsfield High School class of 1957. He later received a BA in Mathematics from UMass Amherst and returned to work at General Electric for over 20 years, during which time he received his MS in Systems Analysis from Union College. Though Jim worked for a long time in program planning for GE, he was usually most proud of some of the short-term jobs he did. He fondly remembered his time as a teenage lifeguard at Onota Lake as the most carefree time of his life. His year in the Coast Guard Reserve after college was formative. His retirement jobs at St. Joseph High School working on office systems and teaching physics, or working in the introductory math classes at Berkshire Community College turned into new careers. He loved driving back roads to his job at Millitech Corporation in Northampton and a stint traveling to fix computer programs for the Y2K bug: “Yeah, they say we had no problems when it turned 2000, but that’s because we fixed it!” Jim was stubborn and he loved to argue or tell endless stories. Though it seemed at times that he was always serious, beneath that, he enjoyed life. He teased himself wearing his “Grumpy” t-shirt. He enjoyed crackers and cheese and a good Manhattan, or wine that was actually OK but only cost $7.99 for 1.5 liters. He liked to eat. A lot. He also cared about trying out new recipes and exploring food. He cooked almost every meal that he and Carol ate for the last 20 years, and since he always loved to learn, his tastes and his cares expanded as he traveled the world with Carol and their friends in his later years. He loved to sit in the sun with his shirt off on hot days. He enjoyed polishing his shoes, or at least it seemed like he did! Jim loved marching in the Fourth of July Parade, whether as a student for the PHS marching band or later for the Berkshire Highlanders playing the pipe band snare drum. His fun side came out most when he got back into a lake or pool to play alligator and monster with his kids, his nieces and nephews or his grandchildren. Jim was quietly dedicated to his children and grandchildren no matter where they were living in the US or around the world. Most importantly, he was dedicated to Carol. They nagged at each other until the end, but they laughed every day and they were never separated. For the past three years, the aim of his life was taking care of Carol. James is survived by Carol, his wife of over 50 years, and his three children and 6 grandchildren: Brian Chanen and Jane McGee with their children Cassandra and Gabriela; Daniel Chanen and Laura Pinsoneault and their children Bridgid and Ella; Katie Horstmann and Travis Horstmann and their children Alivia and Skylar. He also leaves behind his brother Edward Chanen and his two sisters, Halima Chanenczuk and Barbara Chanen. Funeral Notice: Funeral services for Mr. James J. Chanen will be Friday, July 24, 2020 with a Liturgy of Christian Burial at St. Joseph’s Church at 9 a.m., celebrated by the Msgr. Michael A. Shershanovich, Pastor. For those who would like to view the service through a live webcast, please contact Dwyer-Wellington Funeral Home by 4 p.m. on Thursday, July 23, 2020. Entombment in the St. Michael of the Archangel Mausoleum at St. Joseph's Cemetery will follow. Calling hours will be on Thursday, July 23, 2020 from 3 p.m. until 6 p.m. at the Dwyer-Wellington Funeral Home, 220 East Street, Pittsfield, MA, 01201. In lieu of flowers, donations may be made to the St. Joseph Food Pantry in care of the Dwyer-Wellington Funeral Home, in his memory. Doantions CANNOT be made online, but may be made through the Dwyer-Wellington Funeral Home.

James J. Chanen, 80, of Pittsfield, passed away peacefully on Sunday, July 19, 2020 after a short illness. Born on March 29, 1940, Jim was the son of Nicholas Chanen and Anna Novitski Chanen, both of whom emigrated from Poland as children. He... View Obituary & Service Information

The family of Mr. James J. Chanen created this Life Tributes page to make it easy to share your memories.

James J. Chanen, 80, of Pittsfield, passed away peacefully on...

Send flowers to the Chanen family.