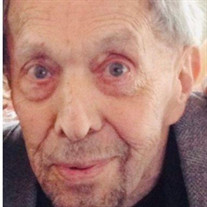 Mr. James J. Driscoll, 86, of Pittsfield, passed away on Friday, May 22, 2020, surrounded by his loving family. Born on March 19, 1934, the son of the late James O. and Helen McCusker Driscoll, he was raised in Pittsfield, MA and graduated from Pittsfield High School in 1952. James worked for General Electric for several years. He was a founding partner of Home Decorators, Inc. Jim enjoyed playing pitch at the American Legion and was a member of the Italian American Club. He loved attending antique car shows with his 1964 Thunderbird convertible. He was also an avid traveler who enjoyed vacationing with his wife and children. Jim was predeceased by his beloved wife, the former Patricia Langlois, whom he married at St. Mary’s Church in 1954. He was also predeceased by his sister, Mary Jane Polchlopek, brother Robert Driscoll, and three son in laws, Edward Poplaski, Russell Canute, and Michael Knysh. Jim is survived by his six children, Jeannie Poplaski James Driscoll (Susan), Judy Lampiasi (Shawn), Joan Penna (John), Jack Driscoll (Debra), and Janice Carnute. He leaves behind his brother, David Driscoll (Patricia). Jim also leaves behind 19 grandchildren, 16 great grandchildren, and many dear nieces and nephews. The family of James would like to extend their gratitude to the staff at Wingate at Melbourne and, Hospice of Western Massachusetts. They would especially like to thank Arlene and Kathy for the tremendous care he received. Funeral Notice: Funeral services for Mr. James J. Driscoll will be Saturday, May 30, 2020 with a Liturgy of Christian Burial at 10 a.m. at St. Charles Church, celebrated by the Rev. A. Peter Gregory, Pastor Emeritus. Burial will be private and held at a later date. In lieu of flowers, donations can be made to Hospice of Western Massachusetts in care of the Dwyer Funeral Home, 776 North Street, Pittsfield, MA 01201, in his memory. Donations CANNOT be made online, but may be made through the Dwyer Funeral Home.

Mr. James J. Driscoll, 86, of Pittsfield, passed away on Friday, May 22, 2020, surrounded by his loving family. Born on March 19, 1934, the son of the late James O. and Helen McCusker Driscoll, he was raised in Pittsfield, MA and graduated from... View Obituary & Service Information

The family of Mr. James J. Driscoll created this Life Tributes page to make it easy to share your memories.

Send flowers to the Driscoll family.