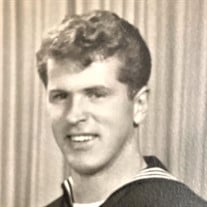 Mr. James Clark Leach, 93, of Pittsfield, passed away on Monday, January 11, 2021. Jim was born in Springfield, MA, on July 31, 1927, the son of Earl George and Bernice Crandall Leach. He was a rehab patient at Springside Skilled Nursing and Rehabilitation Center recovering from a fractured tibia. Jim developed the Covid 19 virus, which sadly claimed his life. We would like to thank the compassionate and professional nursing staff, who helped our entire family say goodbye to Jim through Facetime. On September 21,1944 with his father’s permission, Jim enlisted in the US Navy at the age of 16. He was aboard ship in Tokyo Bay when the Peace Treaty was signed between Japan and the United States of America to end World War II. He was Honorably Discharged on June 21, 1946, with the rank of Seaman 2nd Class. Upon discharge, he joined the US Naval Reserves. Jim was recalled to active duty during the Korean Conflict on September 20, 1950. He was Honorably Discharged with the rank of QM2 on July 24, 1954. During his two tours of Active Service, he was awarded the National Defense Service Ribbon, United Nations Service Ribbon, Good Conduct Medal, Korean Service Ribbon (2 Stars) and Navy Occupation Service Ribbon (Asia). After his time in the service, Jim earned his GED. He later worked as a First-Class Lineman for the former Western Massachusetts Electric Company for 31 years, retiring on February 1, 1988. Jim was an avid naturalist, who loved the outdoors. He adored bird watching and was quite a weather buff. He often was found working on his flower gardens with wife Judy, or tending his extensive vegetable gardens. He loved hunting game in Montana with his son Robert, and hiking and skiing Tuckerman’s Ravine in the White Mountains of NH with all of his children. He was an excellent skier, and if he wasn’t skiing Bousquet, he was doing electrical work for George Jarvis, former owner of the Bousquet ski area. Jim was a faithful communicant of the Jehovah Witness Organization. His unique presence will be missed and lovingly remembered. Jim is survived by his beloved wife of 68 years, the former Judith-Anne Case, whom he married on December 20, 1952. He leaves behind his daughter and caregiver, Cynthia Leach Eksuzian, and his sons, Mark Leach (Laura), Robert Leach (Karen), Ross Leach, and Glenn Leach (Kellie). He is also survived by his grandchildren, Marya Morrow (Benjamin), Brett Eksuzian (Emily), Andrew Leach, Aryn Leach, Trevor Leach, Garrett Leach, Nicklaus Leach, Hannah Leach, and Peyton Leach, as well as his great grand children, Holland and Saylor Morrow and Violet Gelsomin-Eksuzian. Jim was predeceased by his sister, Patricia, and brothers, Donald and Douglas. Funeral Notice: Due to Covid 19 Restrictions, there will be no calling hours. A graveside service will be held at a later date at the Pittsfield Cemetery. In lieu of flowers, donations may be made to the Nature Conservancy or The American Heart Association in care of the Dwyer- Wellington Funeral Home, 220 East Street, Pittsfield, MA 01201. Donations CANNOT be made online, but may be made through the Dwyer-Wellington Funeral Home.

Mr. James Clark Leach, 93, of Pittsfield, passed away on Monday, January 11, 2021. Jim was born in Springfield, MA, on July 31, 1927, the son of Earl George and Bernice Crandall Leach. He was a rehab patient at Springside Skilled Nursing... View Obituary & Service Information

The family of Mr. James Clark Leach created this Life Tributes page to make it easy to share your memories.

Mr. James Clark Leach, 93, of Pittsfield, passed away on Monday,...

Send flowers to the Leach family.