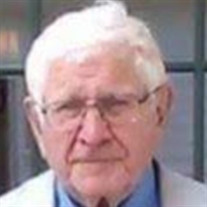 Mr. James Whitney Sullivan, 84, of Dalton, passed away on Tuesday, May 19, 2020 with his loving wife by his side. Born in Dorchester, MA, on April 2, 1936, the son of the late George and Flora (Lampro) Sullivan, he graduated from St. Joseph’s High School in 1954 and Northeastern University in 1959 with his Bachelor of Science in Mechanical Engineering. He was an active participant in the ROTC program while at Northeastern and then enlisted in the United States Army in 1959, where he proudly served his country. For the majority of his career, he worked as the Lead Mechanical Engineer at General Electric from 1960 until his retirement in 1996. Jim took pride in his many designs that were used on Navy battleship guidance systems. Jim could always be found creating either through woodworking projects or his magnificent machines made from junkyard treasures. Jim will be especially remembered for his never-ending contraptions, birthday pranks, song creations, and dry sense of humor. His true devotions were to his family, faith, and his value in education. A testament to this was his daily morning text messages to his grandchildren that often included the math problem of the day, always ended with a “lubu,” and a message to never stop learning. Jim leaves behind his devoted wife, former Elizabeth M. Shorey. They would have celebrated 60 years of marriage on July 2nd. He is survived by his beloved sister, Jean Mantello of Sterling, Virginia. Jim is also survived by his children, Laurie Ann(Timothy), Michael Whitney(Sheri), Jean-Marie Whitney(Eric), Elizabeth Whitney(Stephen) and Thomas Whitney(Diana). He leaves behind 12 grandchildren; Erin, Christopher, Lyndsey, Nicholas, Nathaniel, Camille, Whitney, Emma, Zachary, Kealey, Delaney, and Ainsleigh. He cherished time spent with his three great grandchildren Felicity, Hattie, and Rory. Jim also held a very special place in his heart for his many nieces and nephews. He was predeceased by his parents and two brothers, Jerome and Albert Sullivan. Funeral Notice: A private graveside service for Mr. James Whitney Sullivan will be held at Fairview Cemetery. A memorial mass in his honor will be held on Thursday, July 2, 2020 at 10 a.m. at St. Agnes Church for all whom would like to attend. In lieu of flowers, donations can be made to St. Agnes Educational Program in care of the Dwyer Funeral Home, 776 North St., Pittsfield, MA 01201 in his memory. Please visit www.dwyerfuneral.com to leave condolences and remembrances.

The family of Mr. James W. Sullivan created this Life Tributes page to make it easy to share your memories.

Mr. James Whitney Sullivan, 84, of Dalton, passed away on Tuesday,...

Send flowers to the Sullivan family.