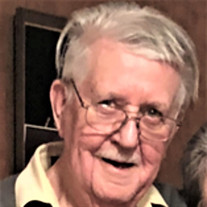 It is with heartbreaking sadness that the family of James F. Vinette announce his peaceful but sudden passing on the morning of Saturday, May 15, 2021. Jim was born in Lanesboro MA, on May 31, 1933. He attended St Charles School before joining his father at the family business, Vinette Plumbing. At the age of 19 James enlisted in the US Navy. He was stationed on the USS New Jersey where he spent 4 years defending his country during the Korean war. As a result of his service he was awarded the China Service Medal, the Korean Service Medal, the National Defense Service Medal and the United Nations Medal. He was extremley proud of his service to his country, and he would often share fond and funny stories with his family. After his time in the service was complete he returned to his home in Pittsfield, MA where he spent many years working as a plumber in the local area. James was the son of the late Martha (Bastow) and Francis Vinette. He was the last surviving sibling of eight children, having been predeceased by three brothers and four sisters; in addition to his parents and siblings he was preceeded in death by a son, Frederick M. Reed. He is survived by his loving and devoted wife - Irene L. Vinette, with whom he had a true love match for almost 50 years, they would have celebrated 37 years of marriage on May 19th. To cherish his memory Jim leaves behind his children Ruth Anne Babcock, Lynne Vinette, Janet Hodgson and her partner Jean Faucher, Peter Reed and his wife Pam, and Brenda Signor and her wife Stephanie Biza. He was a grandfather to 13 grandchildren and a great grandfather to 12 great grandchildren, and was loved by over 30 nieces and nephews. Also left to mourn his passing are close friends and neghbors for 20 years Vikki, Paul and Sean Supranowicz . Jim was known for his quick humor, funny stories and for always having a hard candy in his pocket to give away. He shared his love of old time country music with anyone who would listen, he had a passion for scratching lottery tickets and he threw a mean horseshoe. Known by many names throughout his years: Popeye, Leaky Faucet, Candy man, Pop, Sir, Uncle Jim, Dad, Poppie, Unk and a list of many others, the ones that he was the most proud of were Father and Husband. Family and friends are invited to gather and share stories and memories on Thursday, May 20th from 3:00 to 6:00 at Dwyer Funeral Home, 776 North St. Pittsfield MA 01201. Funeral services will be Friday, May 21, 12:00 noon at the Unity Terrace at Dwyer-Wellington Funeral Home, 220 East Street, Pittsfield, MA 01201. Burial with full miltary honors will follow at St Joseph Cemetery, 222 Pecks Rd., Pittsfield, MA. In lieu of flowers, donations can be made directly to Dwyer Funeral Home to help offset funeral costs.

It is with heartbreaking sadness that the family of James F. Vinette announce his peaceful but sudden passing on the morning of Saturday, May 15, 2021. Jim was born in Lanesboro MA, on May 31, 1933. He attended St Charles School before joining... View Obituary & Service Information

The family of Mr. James F. Vinette created this Life Tributes page to make it easy to share your memories.

It is with heartbreaking sadness that the family of James F....

Send flowers to the Vinette family.