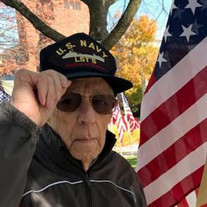 James L. Washburn of Sugar Hill in Dalton, MA passed away on January 31, 2020 at Berkshire Medical Center with his family at his side. Born on February 14, 1922 in Glens Falls, NY,Jim was the youngest son of Charles D. Washburn and Julia Florence Stearns of Gansevoort, NY. The family moved to Pittsfield, MA when Jim was a young boy. He attended local schools and graduated from Pittsfield High School in 1940. His first job was at GE Plastics until he enlisted in the Navy and served in WWII. He was pharmacist mate on LST #266 that landed at Normandy Beach and the following week landed at Sword Beach. Jim returned to Pittsfield and worked at the Morning Side Bakers on Tyler Street until he went to work as a salesman for Ontario Biscuit Co. which later became Keebler Biscuit and is known today as Kellogg’s. Jim spent 36 years working for the company and he was fondly known in the business as “Mr. Keebler”. He was an avid golfer and was a 20-year member of Pontoosuc Country Club and was thrilled and honored to have had two holes in one at Pontoosuc CC and one in Conway, SC. He was also a New England Patriots fan. He was very active in Little League and became a player agent for three years. He stayed on as an assistant coach for a few years under the late, Jim Farry in the East Little League. Jim was a member of the American Legion for 55 years and the Mystic Lodge of Masons for 69 years, attaining the level of 32 degree Mason. He held the position of Monarch of the Grotto and helped in fund raising for people who needed help. Jim leaves his wife, Norma M. Phelps with whom he would have celebrated his 77th wedding anniversary on July 31, 2020. He leaves his two children, James L. Washburn Jr. and his wife, Christine of Lexington, SC and daughter, Joanne Rowett and her husband Peter. He is survived by six grandchildren, Scott Washburn and his significant other Shelby Powell and Todd Washburn of Pittsfield, MA, Tami White and Jason Rowett of Pittsfield, MA, Amanda Washburn Forbus and her husband Geoff of Mount Pleasant, SC. and Brent Washburn and his wife Jenna of Asheville, NC. He also leaves 12 great grandchildren and one great, great grandchild due in Spring of 2020. Jim was predeceased by his brother and his wife, Charles D. Washburn Sr and Dorothy and two sisters Katherine Cannom and Barbara Lapp. Jim’s family would like to thank Berkshire Medical Center’s emergency room staff and the 5th floor doctors and nurses for their care in his final days as well as the staff at Sugar Hill for their compassion and care for the past year. Funeral Notice: A celebration of life for James L. Washburn will be on Sunday, February 9, 2020 at Elks Lodge, 27 Union Street, Pittsfield, MA from 1:00 PM until 4:00 PM. Per his request, there will be no calling hours. In lieu of flowers, donations can be made to Solider On in care of the Dwyer Funeral Home, 776 North Street, Pittsfield MA, 01201, in his memory. Donations CANNOT be made online, but may be made through the Dwyer Funeral Home.

James L. Washburn of Sugar Hill in Dalton, MA passed away on January 31, 2020 at Berkshire Medical Center with his family at his side. Born on February 14, 1922 in Glens Falls, NY,Jim was the youngest son of Charles D. Washburn and Julia Florence... View Obituary & Service Information

The family of Mr. James L. Washburn created this Life Tributes page to make it easy to share your memories.

James L. Washburn of Sugar Hill in Dalton, MA passed away on...

Send flowers to the Washburn family.