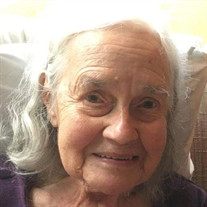 Mrs. Janet Baker Russell, a longtime resident of Chesterfield and most recently Dalton, passed away at the home of her granddaughter on Wednesday, December 22, 2021, shortly after celebrating her 98th birthday. Born in Northampton, MA on November 4, 1923, the eldest of three daughters of the late William H. and Ruth Anderson Baker, she graduated from Northfield Mount Hermon. For decades, Janet was employed by the Hampshire County Regional School District, where she managed the elementary school’s kitchen since the mid 1940s. She took great pride filling the bellies of hundreds of children who walked through her lunch line. She even went above and beyond to assure the children had a healthy meal and that the program stayed within budget. She never took a sick or personal day with the exception of when she donated a kidney to her son, Thomas. It was not until a 2013 illness that she was forced to retire and moved to Dalton to be closer to her family. She enjoyed watching the Red Sox and critiqued their every play. Her love for them started when, as a small child, she would listen to the games on the radio with her father. She knew that baking was a science and cooking was an art and enjoyed teaching her skills to her great grandchildren every day after school. She attentively watched the northeast birds (and squirrels) at her feeder. She was an avid reader and enjoyed many different genres but could never resist a good romance novel. She knitted and crocheted hundreds of hats, mittens, sweaters, scarves, and socks for family and friends. Above all things, the time spent with her grandchildren and great grandchildren brought her the greatest joy. Watching her great grandchildren play sports and hearing of their adventures filled her heart with deep love. Janet was predeceased by her beloved husband of 62 years Edwin W. Russell, whom she married on May 31, 1944. Edwin passed away on June 30th, 2006. She is survived by her granddaughter and caregiver, Sharon Russell Nealon (Donald) and their children Olivia, Donald, EmmaGrace, and Anna. A grandson, Michael Russell (Nicole Guttenberg) and children Trevor and Cooper of Quincy, MA. A sister, Ruth White of Dentin, TX and many loving nieces and nephews. In addition to her husband and parents, Janet was predeceased by her daughter Phyllis (age 2) and sons Thomas (age 47) and Phillip (age 18) all of Chesterfield, and a sister Lois Ford. The family would like to express their deep appreciation for the amazing support of the remarkable caregivers from HospiceCare in the Berkshires. You truly have magical superpowers. Funeral Notice: At Janet’s request, there will be no formal funeral service. A celebration will be held at a later date. In lieu of flowers, donations in her memory can be made to the Chesterfield Historical Society or The National Kidney Foundation.

Mrs. Janet Baker Russell, a longtime resident of Chesterfield and most recently Dalton, passed away at the home of her granddaughter on Wednesday, December 22, 2021, shortly after celebrating her 98th birthday. Born in Northampton, MA on November... View Obituary & Service Information

The family of Mrs. Janet Baker Russell created this Life Tributes page to make it easy to share your memories.

Send flowers to the Russell family.