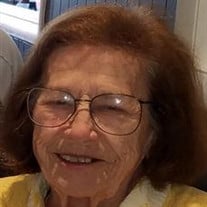 Janet Elizabeth (Porter) Taylor, 92, of Pittsfield passed away on Wednesday, April 29, 2020 at Fairview Commons Nursing and Rehabilitation Center in Great Barrington. Born in Springfield, MA, on January 8, 1928, the daughter of Alfred Nesbit Porter, Jr. and Florence Isabel (Johnston) Porter. She graduated from North High School in Worcester and attended Clark University in Worcester. She was a Pittsfield resident for 60 years. Janet owned Taylor Memorials in Pittsfield for many years and was well known in the community. She became one of the very few women in the monument business in North America. In 1986 she achieved the designation of Certified Memorialist (CM) from the Monument Builders of North America (MNBA). She was a member of the Board of Directors of the New England Monument Dealers Association (NEMDA) and was President in 1998-99. She was a trustee of the Association for Gravestone Studies (AGS). She volunteered at various cemetery restoration projects and was the conservator of the Mahaiwe Cemetery Restoration Project in the Sheffield tornado destruction in 1995. She gave presentations on the care, maintenance, and restoration of cemetery memorials. In a 2003 Berkshire Eagle article she said she felt “she had been given so many opportunities by the community that it was an obligation and privilege to give something back.” She served as administrative assistant to Congressman Silvio O. Conte from 1974-1979. She was active and served on the Board and as Chairman of the Central Berkshire Chamber of Commerce and the Small Business Committee and Public Affairs Committee back in the mid 1970’s and served on the Executive Committee of the Private Industry Council. She is a former president of the Berkshire Art Association, served the Junior League for 25 years, and organized a children’s theatre for eight years. She was a guide at Edith Wharton’s The Mount in Lenox for several years. She also volunteered for several years at the Berkshire Medical Center and the Berkshire Historical Society. She was a former vice chair of the Pittsfield Economic Revitalization Corp (PERC). She was a member of Zonta, and the Dalton Rotary Club. In 1986 she was named as one of Pittsfield’s “Unsung Heroes” in a Berkshire Eagle article. She leaves her five children, two daughters, Pamela J. Wall her partner Alan of Pittsfield, Laurie L. Taylor of Colorado, and three sons, Allen R. Taylor, his wife Tina of New Mexico, Bruce E. Taylor, his wife Penny of Pittsfield, and Russell C. Taylor, his wife Mary of Wyoming, two grandchildren, Aletheia, and Jacob, and great-grandchildren, Derrick, Alexandra, Ezekiel, and several cousins. She was predeceased by her former husband, John E. “Jack” Taylor, who died in 2017. Her family would like to particularly thank her caregivers at the Sugar Hill Senior Living Community in Dalton, Hospice Care in the Berkshires, Berkshire Medical Center in Pittsfield, and the Fairview Commons Nursing and Rehabilitation Center in Great Barrington. Funeral Notice: A private graveside service for family and friends will be held at a later date. In lieu of flowers, donations can be made to either the Berkshire County Historical Society at Arrowhead or HospiceCare in the Berkshires in care of the Dwyer-Wellington Funeral Home, 220 East Street, Pittsfield, MA 01201. Please visit www.dwyerfuneral.com to leave condolences and remembrances.

The family of Mrs. Janet E. Taylor created this Life Tributes page to make it easy to share your memories.

Send flowers to the Taylor family.