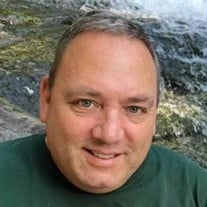 Mr. Jeffrey (Fej) W. Ferrin, 51, of Pittsfield, passed away unexpectedly on Thursday, July 4, 2019. Born in Stockbridge on January 5, 1968, he grew up in Sheffield and graduated from Mount Everett High School in 1986. After high school, Jeffrey enlisted in the United States Army. He was extremely passionate about veteran’s rights as well as community service. To say that Jeffrey was a man of many trades would be an understatement. Not only was he a police officer and a fireman, but also (one of his greatest passions), an EMT for over 30 years. In addition, Jeffrey worked for the City of Pittsfield in the Department of Public Works. He also drove tractor trailer trucks and sold cars. When younger, Jeffrey owned a landscaping company, and was currently working at Little Creek Land Care and Excavation. At the time of his death, Jeffrey was running for Ward 7 City Counselor. It was easy for one to recognize Jeffrey’s passion for politics—once he started talking about them, he could go on forever! In his spare time, Jeffrey was always working on a house project. He also enjoyed being outside, where he could be found camping and taking motorcycle rides with his wife. When indoors, he loved watching MASH, one of his all-time favorite television shows. Besides his beloved wife, Sherry Burgess Ferrin, whom he married on August 21, 2010, Jeffrey is survived by his mother, Beverly Funk. He is also survived by his sisters; Elizabeth Carpenter, Theresa Harris, and Brenda Carmel; his step-daughter, April Vight, son-in-law, Josh Vight and grandson, Logan Vight. Jeffrey also leaves behind his best friend, Jeff Schuler, and his wife, Shelley Schuler, and his great friend, Arnold Raney. In addition, Jeffrey is survived by many adored aunts, uncles, and cousins. He was predeceased by his father, Jerry Ovitt. Funeral Services: Calling hours will be held Thursday, July 11, 2019, from 4 p.m to 7 p.m. at Dwyer Funeral Home. In lieu of flowers, donations can be made to PXE International in care of the Dwyer Funeral Home, 776 North St., Pittsfield, MA 01201 in his memory. Donations CANNOT be made online, but may be made through Dwyer Funeral Home.

Mr. Jeffrey (Fej) W. Ferrin, 51, of Pittsfield, passed away unexpectedly on Thursday, July 4, 2019. Born in Stockbridge on January 5, 1968, he grew up in Sheffield and graduated from Mount Everett High School in 1986. After high school, Jeffrey... View Obituary & Service Information

The family of Mr. Jeffrey "Fej" Ferrin created this Life Tributes page to make it easy to share your memories.

Send flowers to the Ferrin family.