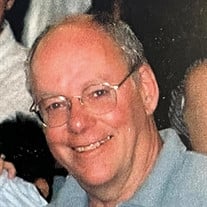 Jeffrey Bellinger Thompson, age 78, passed away peacefully at sunset at his home on Friday, February 18th, 2022, surrounded by his loving family. Jeff was born on May 4th, 1943 in Pittsfield, MA to Zilpha “Sis” Bellinger Thompson and Orlo L. Thompson. He grew up in Dalton, MA and was in the last graduating class (1961) from Dalton High School. He attended the University of Bridgeport (Connecticut) and graduated in 1967. At that time, he was a teacher at Masuk High School in Monroe, CT. He enlisted in the United States Air Force in 1967 and spent four years in the service. Jeff worked on the flight line and worked in avionics on the F-105 in the instrument shop. That included a year in Takhli, Thailand during the Vietnam era. During that time, he married his college sweetheart, Jean Ruhl from Burlington, NJ. Following his military service, Jeff attended Virginia Commonwealth University where he received a Master’s Degree in Social Work. Jeff always felt thankful about his career as a social worker, with the perception that he got to do a lot of good things for people. He was initially employed by the Massachusetts Society for the Prevention of Cruelty to Children (child protective services). The last 34 years of his work career were divided between Hillcrest Hospital, where he was the Director of Social Services, and Berkshire Medical Center, where he was a member of the “Psych Team” (also known as the Primary Care Outreach Team). Jeff retired from BMC in March of 2008. Jeff enjoyed a wide range of friendships that were established all along his path of life. He was very active in the community after his retirement, and had the opportunity to serve in many organizations, including The Council on Aging, Berkshire United Way, RSVP, Soldier On, The Santa Toy Fund, Big Sisters, Goodwill Industries, Berkshire Place, and at Berkshire Health System. He was chairman of the group that restored Pittsfield’s renowned sculpture: the World War I “Peace Monument”. He also played a key role in the restoration of the sculpture of the Civil War Soldier in Park Square. He was a member of the First United Methodist Church in Pittsfield. He also volunteered at Tanglewood and the Colonial Theater. Jeff was a past commander of the VFW, Post 448, in Pittsfield, and was very active in the Veterans’ community. Jeff loved living at Pontoosuc lake. He forever loved a beautiful sunset, and often enjoyed time on the dock. He was a sports fan through and through, and especially loved the Red Sox, the Patriots, and Virginia Tech football. He was a daily walker, either indoors somewhere or outdoors on the bike trail, depending on the weather. Jeff is survived by his wife Jeannie and his two children, Laurie Beth Keatts of Hickory, North Carolina, and Stephen Ruhl Thompson (wife: Debbi Thompson) of Fort Collins, Colorado. Jeff adored his children as well as his four grandchildren, Jillian and Lucy Keatts, and Fiona and Brayden Thompson. The grandkids took to calling him ‘“Bacoobah”, following Jillian’s lead when she came up with this unique name when she was a toddler. The four grandchildren sure loved their Bacoobah. Jeff is also pre-deceased by his brother, Orlo Stephen Thompson of Groton, MA, and survived by his sister Zilpha “Zell” Thompson Murray of Springfield, MA. Throughout Jeff’s life, he touched the hearts and lives of so many individuals in so many ways. He was a dedicated true friend to countless people. He was a loving and caring husband, father, and grandfather, and was always there for his family and friends. His many stories, sense of humor, and passion for finding fun and joy in life will live on through his family. He was a bright light in this world, and was always willing to help others in both his professional and personal life. He will undoubtedly be missed by all who knew him, and most especially by his family. Funeral Notice: There will be a celebration of Jeffrey’s life later in the spring or early summer, with additional details to be finalized at a later date. In lieu of flowers, donations can be made in Jeff’s memory to Boston University School of Medicine, Amyloid Center Research Fund, 72 East Concord Street, #K-503, Boston, MA, 02118.

Jeffrey Bellinger Thompson, age 78, passed away peacefully at sunset at his home on Friday, February 18th, 2022, surrounded by his loving family. Jeff was born on May 4th, 1943 in Pittsfield, MA to Zilpha &#8220;Sis&#8221; Bellinger Thompson... View Obituary & Service Information

The family of Mr. Jeffrey B. Thompson created this Life Tributes page to make it easy to share your memories.

Send flowers to the Thompson family.