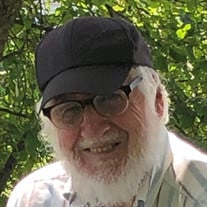 Mr. Jerome Bromback, 84, of Pittsfield, passed away of natural causes on Wednesday, May 6, 2020. Born in Pittsfield, MA, on September 30, 1935, the son of the late John and Katherine Haggerty Bromback, he graduated from St. Joseph’s High School in 1953. As a child, he lived and worked on the family farm on Pecks Road in Pittsfield. He then moved to Lanesborough, MA where he continued to care for the livestock and gardens with his father and brothers. Jerome was a Korean War Veteran. He served in United States Army for 5 years stationed in Korea. It was there he met his wife, Duk Soon. Upon returning to Pittsfield, Jerome and Duk Soon moved back to the homestead on Pecks Road where they raised their family. Jerome was employed at General Electric where after 40 years of service, he retired. Jerome took great pride in his family. He always attended his children’s activities, including their many sporting events, yet he still found time to enjoy working in his vegetable garden. Besides his wife, Duk Soon, Jerome is survived by his brother Bernard Bromback, his sister MaryLou DiNicola (Richard), and his children, Joseph Bromback (Wendy), Jo Ann Chalmers (Rob), June Bromback, James Bromback, and Jane Angermeier (David). He also leaves behind 7 dear grandchildren, Courtney, Kayla, Olivia, Daniel, Joshua, Eric, and Ryan. Besides his parents, Jerome was predeceased by his siblings, Katherine Bromback Grandbois, John Bromback, and Paul Bromback. Funeral Notice: There will be private graveside service for the family of Mr. Jerome Bromback. In lieu of flowers, donations can be made to St. Charles church in care of the Dwyer Funeral Home, 776 North St., Pittsfield, MA 01201 in his memory. Donations CANNOT be made online, but may be made through the Dwyer Funeral Home.

Mr. Jerome Bromback, 84, of Pittsfield, passed away of natural causes on Wednesday, May 6, 2020. Born in Pittsfield, MA, on September 30, 1935, the son of the late John and Katherine Haggerty Bromback, he graduated from St. Joseph&#8217;s High... View Obituary & Service Information

The family of Mr. Jerome Bromback created this Life Tributes page to make it easy to share your memories.

Mr. Jerome Bromback, 84, of Pittsfield, passed away of natural...

Send flowers to the Bromback family.