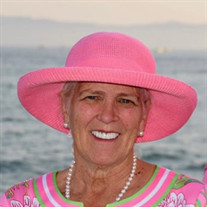 Rotary, Garden Clubs President. Family Historian. Of Palm Beach, FL., and Danvers, MA, Jo-Ann Hollister Emerson, 77, a woman cherished by generations of a growing family. To those who knew her well, Jo-Ann embodied the spirit of her favorite childhood character, The Unsinkable Molly Brown, who joyfully sang, “I Ain’t Down Yet” in the face of her dilemma. Beloved wife of Galo P. Emerson, Jr. for 30 years. Devoted mother of Robin, Barry, Wendy and Karen. Adored by 20 Grand and one Great-Grandchild. Born in Pittsfield, MA July 15, 1943, the daughter of Rose E. (Pender) Hollister and Norman B. Hollister; she was raised and educated in the city of Pittsfield. On Sunday, March 14th, she was admitted to the Palm Beach Gardens Medical Center where she passed away that evening from complications of a blood infection. Jo-Ann will be interred at the Putnam Cemetery in the families’ private grounds in Danvers, MA For 25 years, she and her husband Galo ran Putnam Pantry, the family’s ice cream and candy business at 255 Newbury Street, Danvers, a business founded in 1951 by Galo’s father and operated today by his son Eric and his wife Cathie of Danvers. For the past five years Jo-Ann and Galo have made Palm Beach, FL home, while traveling north to spend summers with their large and extended New England family. They were considered by most to have an insatiable thirst for travel and had recently traveled with different family members to Europe, Mexico, and China. She was the first person to say yes to an invitation and never missed an opportunity to spend time with her family. Jo-Ann was a loving, compassionate and welcoming woman who always had room at her table for one more. Her infectious smile lit up the room and her presence filled even the largest of spaces. Jo-Ann was equally well known for publishing a family history book on the Keyburn-Pender family tree. At the time of her death, she was working on a generational update of the hard-cover original to be published for this year’s triennial family reunion. She was a loving sister to siblings Keye, Barry and Jim. She was an active member of the Danvers Historical Society, Member of the Danvers Garden Club serving as President from 1999-2001 where she spearheaded the development of a Children’s Garden, Member of the Danvers Rotary Club serving as President from 2003 –2004. She contributed to the restoration of the General Israel Putnam House and was Board Member of the General Israel Putnam Homestead Trust. Over her lifetime Jo-Ann was active as an accountant, real estate professional and business owner. She graduated Pittsfield High School, Class of 1961, attended Chamberlain School of Retailing, Berkshire Community College (Associate Degree in Accounting) Western New England College (Bachelor degree in Accounting) and was a career public accountant. In the 1970’s she worked as Lead Accountant for the publisher, Ski America in Pittsfield and later, for 10 years in Title Research at Roche, Carens & DeGiacomo, Boston. She leaves behind her daughter Robin Wadsworth (Rita Hubner) of Newton, MA, son Barry Wadsworth (Sandy) of Westfield, MA, daughter Wendy Bryan (Phil) of Dedham, MA, daughter Karen Rella (Tony) of Dedham, MA, stepdaughter Kim Morris (Arnie) of Jackson Hole, WY, stepdaughter Wendy Emerson (Tim Martens) of Topsfield, MA, stepson Eric Emerson (Cathie) of Danvers, MA, stepson Nathan Emerson (Lindsey) of Jackson Hole, WY. Her twenty grandchildren were the pride of her life: Kyle and Kaitlyn Hubner, Katherine, Kristina, Ryan Wadsworth, Sean, Matt and Tim Bryan, Mark and Madison Rella, Haley and Matt Roberts, Robert and Sally Morris, Samantha Martens, Lauren Lamoly, Sarah Gay, Riley Mercier, Quincy & Reese Emerson and one great-granddaughter Emerson Figurido. She also leaves behind her siblings P. Keyburn Hollister (John Gobel) of Pittsfield, MA, J. Barrett “Barry” Hollister (Susan) of Pittsfield, MA and James P. Hollister (Robin) of Wellesley, MA and the many friends she has amassed around the world. She was predeceased by her first husband Basil Robert “Wiggs” Wadsworth, Jr and her parents Rosalie and Norman Hollister. Funeral Notice: Relatives and friends are invited to the C.R. Lyons & Sons Funeral Directors, 28 Elm Street, Danvers, MA, on Friday, March 26, from 4 p.m until 7 p.m. for calling hours. The Liturgy of Christian Burial for Jo-Ann will be private. In lieu of flowers, donations can be made to the Danvers People-to-People Food Pantry, PO Box 2076, Danvers, MA 01923.

Rotary, Garden Clubs President. Family Historian. Of Palm Beach, FL., and Danvers, MA, Jo-Ann Hollister Emerson, 77, a woman cherished by generations of a growing family. To those who knew her well, Jo-Ann embodied the spirit of her favorite... View Obituary & Service Information

The family of Mrs. Jo-Ann Emerson created this Life Tributes page to make it easy to share your memories.

Send flowers to the Emerson family.