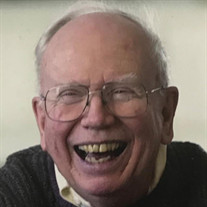 John Mitchell Anthony, Sr. passed away peacefully at Kimball Farms Nursing Center on August l7, 2020, after a long illness, at the age of 96 years. John’s life began in Hamilton, Bermuda on May 4, 1924. The son of Herbert and Marguerite Anthony, he lived his formative years in 8 different states and 13 towns and cities in the United States. After settling in the Boston, MA area, he was employed by the Ford Motor Company Assembly Plant in Somerville, MA in the l940’s as Engineer Manager. Also, in the Boston area he met his future wife, Priscilla Anne Huse of Lowell, MA, and they were married on June 23, l951. They subsequently moved to the Berkshires with their two-year- old son John Mitchell (Mitch). A second son, Dale, completed the family in l957. In l958 he began his career with the Specialty Paper Division of the Mead Corporation, in South Lee, MA. He held the position of Human Resources Director for 10 years and Marketing and Sales Manager for 20 years. After his retirement he was one of six industry members elected to the International TAPPI Decorative and Industrial Laminates Hall of Fame “for outstanding and sustained contributions to the paper and laminate industry.” John was always interested in service activities, especially those that helped make the world a better place. He was a member and president of the Lee Rotary Club and the Boy Scouts of America as president of the BSA Council. He was honored by the BSA in l968 when awarded the Silver Beaver, a coveted recognition of significant contribution to the area Boy Scouts program. As an active participant in the South Congregational Church in Pittsfield, he held many and varied positions for close to 60 years: Church Moderator, member of the Board of Trustees, Deacons, Missions, as well as Church Clerk for 20 years. He taught the church High School Class for 10 years, some of whom remain in contact to the present day. In l987 both he and Priscilla were named Honorary Deacons for life. During the celebration of South Church’s 150th anniversary, he authored the book entitled South Church at 150 – In Our Own Words which covers the history of the church from l950 to 2000. In l988 John founded and moderated what is known as “The Men’s Forum,” a group of retired men at South Church, plus interested men from the Berkshire area, who meet weekly for a bag lunch, to discuss and ponder subjects of interest. Today the group still meets weekly. John enjoyed reading, art, music, both classical and jazz, writing, wood working, sailing and photography, but most of all –he sought and welcomed challenges. Survivors are his wife of 69 years, Priscilla, two sons, John Mitchell Anthony, Jr., (wife Deborah) of Greenfield, MA., and Dale C. Anthony (wife, Elizabeth) of Southampton, MA.; two grandsons, Devan Anthony of Portland OR; and Sayre Anthony of Turner Falls, MA.; one granddaughter, Mia Anthony of Rochester, NY; and a cousin Susan Blau of Keene, NH. Funeral Notice: A Memorial Service will be held at a future date to honor John’s memorable life. In lieu of flowers, donations can be made to the South Congregational Church of Pittsfield in care of the Dwyer-Wellington Funeral Home, 220 East Street, Pittsfield, MA 01201, in his memory. Donations CANNOT be made online, but may be made through the Dwyer-Wellington Funeral Home.

John Mitchell Anthony, Sr. passed away peacefully at Kimball Farms Nursing Center on August l7, 2020, after a long illness, at the age of 96 years. John&#8217;s life began in Hamilton, Bermuda on May 4, 1924. The son of Herbert and Marguerite... View Obituary & Service Information

The family of Mr. John Mitchell Anthony, Sr. created this Life Tributes page to make it easy to share your memories.

Send flowers to the Anthony, family.