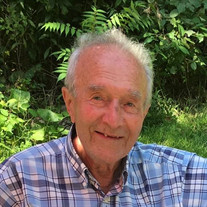 Mr. John P. Buratto, 93, of West Stockbridge, died on Sunday, January 5, 2020 at his home where he had lived for most of his life. Born in Richmond, MA, on August 20, 1926, the son of the late Bortolo and Candida Battistoni Buratto, he attended local schools in West Stockbridge, where his family relocated to in the early 1930s. After pursuing his education, John worked in Richmond on his Zia Fortuna’s farm. He later operated Buratto Construction, a business that he ran into his late eighties. He was a teacher and mentor to many throughout his years in the construction business including his nephews and niece. John was a horse owner and trainer for many years. He very much enjoyed horse-racing and could be found traveling to various horse tracks in the New England area, where he would bet on all of the hot horses. He rarely missed a race at the Saratoga Race Track! John was fond of the outdoors and especially liked vegetable gardening and hunting. He was the owner and coach of Buratto’s Raiders and Buratto’s Construction softball teams in the 1970s and 1980s. John is survived by his sister, Mary Korte, as well as many dear nieces, nephews, and extended family members. He was predeceased by his brothers, Joseph (Blanche), and Reno (Norma). He was also predeceased by his nephew, Michael Buratto, and niece, Ann Buratto. We will all miss his smile, and his happy and generous heart. John was a gentle man who loved his family and community. We will forever cherish our memories with him. Funeral Notice: Funeral services for Mr. John P. Buratto will be Saturday, January 11, 2020, with a Liturgy of Christian Burial at 11 a.m. at St. Patrick’s Church in West Stockbridge, celebrated by the Msgr. John Bonzogni. Burial will follow at St. Patrick’s Cemetery. There will be an hour of visitation at the church prior to the service from 10 a.m. to 11 a.m. In lieu of flowers, donations can be made to Elder Services Meals on Wheels Program in care of the Dwyer Funeral Home, 776 North St., Pittsfield, MA 01201 in his memory. Donations CANNOT be made online, but may be made through the Dwyer Funeral Home.

Mr. John P. Buratto, 93, of West Stockbridge, died on Sunday, January 5, 2020 at his home where he had lived for most of his life. Born in Richmond, MA, on August 20, 1926, the son of the late Bortolo and Candida Battistoni Buratto, he attended... View Obituary & Service Information

The family of Mr. John P. Buratto created this Life Tributes page to make it easy to share your memories.

Send flowers to the Buratto family.