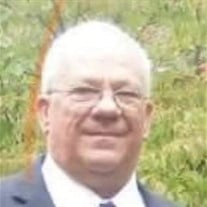 Not sure what to send?

John Francis Carpenter, of Hinsdale, passed away at home on November 26, 2021, just one day after celebrating his 70th birthday. Born in Pittsfield, MA, on November 25, 1951, the son of the late James Carpenter and Anita Shartrand (Leo), he grew up in Pittsfield, Lee, and Becket. John enlisted in the United States Army from 1970 until 1972, where he served in the Vietnam War before starting his career with Crane and Company. He retired from Crane and Company after 40 years of service. John always enjoyed being outdoors, especially when hunting, fishing and playing a round of golf. He loved spending time with his grandchildren and jumped at any opportunity to watch their activities. He was a member of the Dalton VFW and the Dalton American Legion. In his earlier years, John was every active with Hinsdale youth sports. Whether it be soccer, baseball, or softball, you could typically find him coaching! He is survived by his wife of 48 years Judy (Fuller) Carpenter, daughter Kellie Cilley, son John (Brenda), and his grandchildren Marissa, Gavin, Zachary, and AJ. John leaves behind his siblings, Michael Carpenter (Corky), and Peggy Moore (Tom), as well as his uncle Al Beaujean and many nieces and nephews. He also has half siblings that he held dear to his heart, Leo Shartrand (Corinne), David (Tina), Tom, Ruth, Michelle, and Suzy and stepmother Barbara. John was predeceased in death by his parents, brother James Carpenter, sister Diane Monterosso, and son in law Jeff Cilley. John’s family would like to extend their sincere gratitude and a special thank you to Pam, George, Tammy, Diane, Beverly, Shannon, Jamie and the many others who have helped along the past months. Funeral Notice: A celebration of John’s life will be held on Saturday, July 9, 2022, at the Hinsdale Fire Department pavilion. In lieu of flowers, donations in his memory can be made to the Hinsdale Fire Department or the Becket Federated Church.

John Francis Carpenter, of Hinsdale, passed away at home on November 26, 2021, just one day after celebrating his 70th birthday. Born in Pittsfield, MA, on November 25, 1951, the son of the late James Carpenter and Anita Shartrand (Leo), he... View Obituary & Service Information

The family of Mr. John F. Carpenter created this Life Tributes page to make it easy to share your memories.

John Francis Carpenter, of Hinsdale, passed away at home on November...

Send flowers to the Carpenter family.