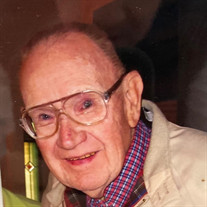 Mr. John H. Ellis, 96 of Dalton, passed away on Monday, December 16, 2019, at Craneville Place of Dalton, where he had been a resident since March. Born in Dunmore, PA on March 7, 1923, the son of the late Howard and Margaret Young Ellis, he graduated from Dunmore High School in Dunmore, PA. John enlisted in the US ARMY in January of 1942, serving with Company C 805th Engineer Battalion in South America in Peru, Ecuador and the Western Pacific, with the invasions of Saipan, Tinian and Okinawa. John was a compound maker, employed be General Electric in the plastics manufacturing division for 38 years, retiring in 1985. John was a 70-year member of the Unity Globe Lodge AF & AM in Dalton, a member of the Scottish Rite-32nd Degree of Pittsfield and the Melha Temple of the Shrine. He was also active in both the Dalton American Legion Post 155 in Dalton and VFW Post 9566 in Dalton, where he was Chaplain for both Posts. Besides his beloved wife, the former Barbara Smith, whom he married on September 16, 1950, John is survived by his son, David R. Ellis and his wife Susan, granddaughters Katharine Tapley and her husband Eric of Exeter, NH , Theresa Ellis of Quakertown, PA, great grandsons Samuel and Arwen Tapley and two nieces Marge Grabowski and Nancy Santarsiero. Funeral Notice: A memorial service for John H. Ellis will be held Sunday, January 5, 2020 at 2pm at the Dalton United Methodist Church. There will be an hour of visitation prior to the service starting at 1PM and continuing until the start of the service. Burial with Military Honors will be in the spring in the Ashuelot Cemetery. Donations in John’s memory may be made to the Dalton United Methodist Church Memorial Fund in care of the DWYER-WELLINGTON FUNERAL HOME, 525 Main St., Dalton, MA 01226. Donations CANNOT be made online, but may be made through Dwyer-Wellington Funeral Home.

Mr. John H. Ellis, 96 of Dalton, passed away on Monday, December 16, 2019, at Craneville Place of Dalton, where he had been a resident since March. Born in Dunmore, PA on March 7, 1923, the son of the late Howard and Margaret Young Ellis, he... View Obituary & Service Information

The family of Mr. John H. Ellis created this Life Tributes page to make it easy to share your memories.

Send flowers to the Ellis family.