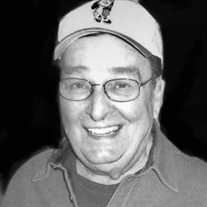 John B. Hinman, 86, of Pittsfield passed away on January 6, 2021. The son of Herbert Hinman and Blanche Summerfield, John spent his early years in Canaan, NY, as well as the Berkshires. He joined the Marine Corps and proudly served until 1955. Upon his return from Korea, he sold airtime for radio stations such as WXKW, Troy WRNW, Mount Kisco, and WPTR Albany. When his step-father started WSBS in Great Barrington, John joined him selling airtime, reading the daily news from the Morgan House in Lee, and broadcasting live music from the Music Inn when it was the hub of jazz. John decided being sober was a better way of life and enrolled in night school to pursue his degree in social work. After years of working at Hillcrest Hospital and Longview Associates as a substance abuse counselor, he branched out on his own at Northeast Employee Assistance Program in Clifton Park helping countless individuals with their sobriety. John was sober 47 years, and up until the time of his death continued as a sponsor assisting others with their addiction. His many enjoyments included spending time on the point at Queechy Lake with life-long friends as well as restoring his 49 Buick, 68 Dodge pickup, and 70 El Dorado. He never minded selling them at a loss, stating “the journey is the best part of fixing them.” One of his favorite stories to tell was of the fun times he and an old friend had back in the day racing around a gravel bed/corn field, which later became Lime Rock Park. John is survived by his sons, Steven Hinman, Kenneth Hinman (Ginger), Paul Hinman (Amanda), as well as his daughter-in-law, Deann Hinman. John was predeceased by his son, Mark Hinman, and his brother, Robert Hinman. He also leaves four granddaughters, Marcella, Ashleigh, Paige, and Peyton. Funeral Notice: At this time, there will be no funeral services. Donations in his memory may be made to the Berkshire Humane Society in care of the Dwyer Funeral Home, 776 North Street, Pittsfield MA, 01201. Donations CANNOT be made online, but may be made through the Dwyer Funeral Home.

John B. Hinman, 86, of Pittsfield passed away on January 6, 2021. The son of Herbert Hinman and Blanche Summerfield, John spent his early years in Canaan, NY, as well as the Berkshires. He joined the Marine Corps and proudly served until 1955.... View Obituary & Service Information

The family of Mr. John B. Hinman created this Life Tributes page to make it easy to share your memories.

Send flowers to the Hinman family.