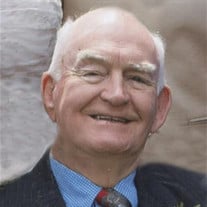 Mr. John G. Horton, 85, of Pittsfield, passed away on Wednesday, January 16, 2019, at home, surrounded by his family. Born in Pittsfield on March 22, 1933 the son of Benjamin M. and Alice F. Clancy Horton, he was a 1950 graduate of St. Joseph High School. Mr. Horton was a licensed Master Electrician. He was a member of the International Brotherhood of Electrical Workers for over 50 years. Through the union, he worked for several local contractors. John taught the Electrical Apprentice Program for many years that was offered through the union. In addition to being a well-respected Master Electrician, he was also an accomplished vocalist. John sang at many weddings over the years. Mr. Horton is survived by his wife, the former Lucille Roy, whom he married on January 23, 1954 in Bennington, VT. He also leaves his six children, Joseph M. Horton, Marie M. Cole, Elizabeth A. Horton, Teresa A. Daigle, Christopher J. Horton and Paul B. Horton; 11 grandchildren and 11 great grandchildren. He was predeceased by a daughter, Michelle M. Horton, two brothers, Rev. Benjamin M. Horton, S.S.J., of the Josephite Society of Catholic Priests and Daniel J. Horton and a sister Eleanor Horton. The Horton family would like to extend a heartfelt thanks to Hospice of Western and Central Massachusetts, especially Arlene, Kathy, Dominic, Eleanor, Terry and Nicky, and Dr. Kitler for their excellent care. Funeral Notice: Funeral services for Mr. John G. Horton will be Saturday, January 19, 2019 with a Liturgy of Christian Burial at 12 noon at St. Joseph Church, celebrated by Msgr. Michael Shershanovich, pastor. Concelebrant will be Fr. Christopher Malatesta of St. Agnes Parish in Dalton. Burial at St. Joseph Cemetery will be later in the week and private for the family. In lieu of flowers, donations can be made to the St. Luke’s Alumni Nursing Scholarship Fund in care of the Dwyer Funeral Home, 776 North St., Pittsfield, MA 01201 in his memory. DONATIONS CANNOT BE MADE ONLINE, but may be made through the Dwyer Funeral Home.

The family of Mr. John G. Horton created this Life Tributes page to make it easy to share your memories.

Send flowers to the Horton family.