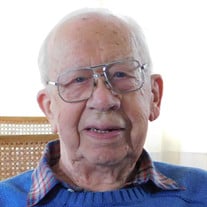 John (“Jack”) Edward Rusk, a long-time Pittsfield resident, passed away peacefully on October 11, 2018 with family at his side. He was born January 28, 1923 in Middleboro, Massachusetts to Thomas L and Amelia R Rusk. He served in the Army Air Force during WWII and graduated from the University of Rhode Island in 1948. He married Janet Charlene Wilde on June 22, 1946, at Pawtucket Congregational Church in Pawtucket, Rhode Island, and they recently celebrated their 72nd wedding anniversary. Jack worked as an engineer for General Electric Ordnance Department for over 37 years and was active in the Navy League; he retired in 1984. He stayed busy during his free time - he was the Scoutmaster for Troop 1 in Pittsfield; an avid golfer at the Berkshire Hills Country Club; loved skiing and was very involved in the Mount Greylock Ski Club, serving as President for several years; later in life he skied at Jiminy Peak where he was an active member of the Over 70 Ski Club. He even skied with his family on his 90th birthday. He enjoyed sailing with friends and went on numerous trips sailing along the New England coastline. Jack was a faithful member of The Berkshire Hillsmen Barbershop Chorus for over 42 years, serving in officer positions at the local & district levels. He was a handyman who could build/fix almost anything and spent many hours volunteering for Habitat for Humanity. He was also a member of South Congregational Church where he sang in the choir. In addition to his parents, John was predeceased by his brothers Tom and Milt. He is survived by his wife and their 5 children: Greg (Roma), Bedford, TX; Bob (Holly), Delafield, WI; Dave (Kenna), Clayton, NC; Debbie (Len), Norco, CA; Dick (Kim), Dalton, MA; 8 grandchildren: Mike (Nicole), Mitch (Brian), Shawna, Dan (Doreen), Mallory (Will), Heather (Martin), Lindsey, and Kate; and 8 great-grandchildren: Caleb, Logan, Kylie, Lukas, Willem, Edison, Wyatt, & Finley. His family would like to especially thank Lori Smith for her compassionate care during the past 9 months as well as HospiceCare in the Berkshires. John Rusk had a long full life and was a guiding light for his wife, children, grandchildren and great-grandchildren. We will miss him dearly. Funeral Notice: A memorial service for John (“Jack”) Edward Rusk will be held Friday, Oct. 26, 2018 at 3 p.m. at South Congregational Church, 110 South St., Pittsfield, MA. The family will receive friends following the service. In lieu of flowers, memorial contributions in John’s name may be made to Harmony Foundation International (110 7th Ave. N, Suite 200, Nashville TN 37203, www.harmonyfoundation.org (Memorial Giving)), Habitat for Humanity (121 Habitat St., Americus, GA 31709-3498, www.habitat.org ) or South Congregational Church (110 South St., Pittsfield, MA 01201, www.southchurchpittsfield.org. Donations may also be made through the Dwyer Funeral Home, 776 North St., Pittsfield, MA 01201.

John (&#8220;Jack&#8221;) Edward Rusk, a long-time Pittsfield resident, passed away peacefully on October 11, 2018 with family at his side. He was born January 28, 1923 in Middleboro, Massachusetts to Thomas L and Amelia R Rusk. He served... View Obituary & Service Information

The family of Mr. John "Jack" E. Rusk created this Life Tributes page to make it easy to share your memories.