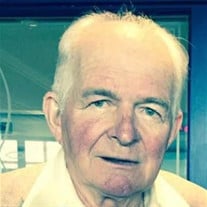 Mr. John E. May, 81, of Cheshire, passed away peacefully at his home on Thursday, November 19, 2020, with his loving family by his side. Born in Pittsfield, MA, on February 24, 1939, the son of the late Franklin and Margaret Artz May, he was the youngest of nine children. He graduated from Pittsfield High School. John was a United States Navy veteran. He enlisted in the Navy in 1958, shortly after his high school graduation, and he proudly served his country in the US Naval Mobile Construction Battalion Number Six as a Seabee until he was discharged to the reserves in 1962. For much of his career he worked as a troubleshooter. His apprenticeship was earned from May’s Engineering of Pittsfield, MA, where he worked under his father and his uncle Ward. He went on to apprentice other toolmakers and took great pride in that family skill. John was a dedicated employee of General Electric, working as an engineer and ultimately retiring from Lockheed Martin in 1995 after many years of dedicated service, including troubleshooting for submarines. John enjoyed boating, fishing, hunting, and puttering around the home that he built with his own hands back in 1970. He loved watching sports, especially football, baseball, and NASCAR racing. John was a member of the Blue Anchor Fishing Club, Cheshire Ride and Gun Club, the American Legion, and NRA. John was predeceased by his wife of 36 years, the former Patricia “Patsy” DeChaine, whom he married on April 9, 1960. Patsy passed in 1996. He is survived by his daughter, Deborah May, as well as his siblings, Beverly May Simon and Charles “Chuck” May. He leaves behind his grandchildren, Crystal Bradley (Nick) of Pittsfield, Katrina Kruszyna (Mario Alvarez) of Davie Florida and Daniel JJ Kruszyna of Cheshire, as well as his four dear great grandchildren. Besides his wife and parents, John was predeceased by his son Michael May, as well as his siblings, Franklin, William, Richard, George, Barbara Milne and Joan Derby. Funeral Notice: It was John’s wish not to have a memorial service. The immediate family will have private celebration of life for Mr. John E. May at a later date, when Covid restrictions are lifted and they are able to gather together in a safe manner. In lieu of flowers, donations can be made to Pop Cares or the Shriners Hospital for Children in care of the Dwyer Funeral Home, 776 North St., Pittsfield, MA 01201 in his memory. Donations CANNOT be made online, but may be made through the Dwyer Funeral Home.

Mr. John E. May, 81, of Cheshire, passed away peacefully at his home on Thursday, November 19, 2020, with his loving family by his side. Born in Pittsfield, MA, on February 24, 1939, the son of the late Franklin and Margaret Artz May, he was... View Obituary & Service Information

The family of Mr. John E. May created this Life Tributes page to make it easy to share your memories.

Send flowers to the May family.