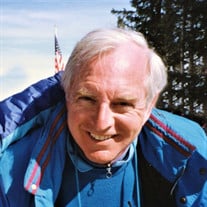 Joseph Barrett “Barry” Hollister, 80, of Pittsfield, passed away peacefully at his home on Friday, November 26, 2021, with his family by his side. Born in Pittsfield, MA on June 18, 1941, the son of the late Norman Barrett and Rose Pender Hollister, he graduated from Pittsfield High School (1960), San Francisco State College (1965), and Harvard University Graduate School of Business Administration’s Owner/President Management Program (1989). Barry was a lifelong entrepreneur who built a career around his passions: skiing, music, community, and family. In the 1960s, Barry was a ski instructor at Bousquet in Pittsfield; Mt. Tremblant in Quebec, Canada; and Squaw Valley and Heavenly in California. He worked in the music industry as a concert producer in San Francisco and later as manager for The Quarry, a band from Pittsfield, that played at Woodstock and toured internationally. In 1966, Barry founded Ski America, which expanded to include a nationwide ski brochure distribution business and the publication of “Ski America” magazine, for which he served as its president for more than 30 years. In 2002, he helped his eldest son Jeremy Hollister launch his own company, an award winning creative design studio, which still operates today. In 2008, Barry focused his energy on advocating for sustainable community-supported agriculture through a new start-up, Berkshire Harmony. Family meant everything to Barry, and he played a central role in his extended family’s life. He found great reward through raising his children, Jeremy Hollister, Elizabeth Hollister O’Donnell, C. Colin Hollister, and Kathryn Hollister with his wife, and love of his life, the former Susan Snook, whom he married on August 22, 1981. Barry is survived by his beloved wife and four children as well as his siblings, P. Keyburn Hollister and James Hollister. Barry is also survived by his grandson, James Barrett O’Donnell, and many cousins, nieces, nephews, and friends. He was predeceased by his parents and sister, Jo-Ann Hollister Emerson. Funeral services will be Saturday, December 4, 2021, with a Liturgy of Christian Burial at 11 a.m. at St. Mark’s Church. Calling hours will be Friday, December 3, 2021, from 4 p.m. to 6 p.m. at the Dwyer Funeral Home, 776 North Street, Pittsfield MA 01201. In lieu of flowers, honoring Barry’s memory can be made by donating to Elder Services of Berkshire County, or by visiting your local ski hill. A showcase of his life’s achievements can be found at barryhollister.com

The family of Mr. Joseph "Barry" Hollister created this Life Tributes page to make it easy to share your memories.

Send flowers to the Hollister family.