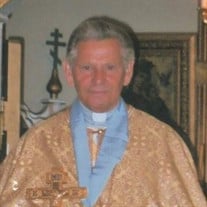 Archpriest Jozef Petranin, 86, Pastor Emeritus of the Saint Nicholas Orthodox Church of Pittsfield, MA fell asleep in the Lord on Tuesday, March 10, 2020, surrounded by his loving family. Born in Lipova, in the former Czechoslovakia, the son of the late Peter and Anna Petranin, he was the beloved husband of the late Matushka Julia Petranin. He is survived by his daughter Nadja Todorovic, Son-in-law John, and his son Julian Petranin and daughter-in-law Cindy, along with his four Grandchildren, Jozef and Lexie Petranin, & Jason and Jax Todorovic. He graduated from the Faculty of the Orthodox Divinity [Eastern Rite] Seminary in Presov, Slovakia in 1956. Shortly thereafter, as the just ordained priest he was assigned to the parish of Hlinne on September 1st, 1956. Archpriest Jozef Petranin was the Orthodox Parish Administrator for the Strazske Region from 1962 to 1970 and oversaw the construction of a new Parish Building. He was also Chairman of the Eparchial Council of the Orthodox Church Missionary Section of Michalovce. Archpriest Jozef and his family were viciously victimized in the persecution in the aftermath of the Prague Spring of 1968. The communist government geo-politically kept power by the Warsaw pact invasion. It actively fomented religious sectarianism between the local Greek Catholic and Eastern Orthodox communities, often encouraging the seizing of churches by force. Fr. Jozef and his family suffered many indignities at the hand of this government-supported sectarianism that regularly led to nightly, deadly threats against him and his family. These events were pivotal moments resulting in Fr. Jozef and his family emigrating to the United States on April 2nd, 1970. Upon his arrival, Fr. Jozef was assigned to the St. Nicholas Orthodox Church in Pittsfield, MA. The Church was established in 1916 and was still holding services in its small and modest building with a rudimentary rectory located in its basement. Seeing this, Fr. Jozef’s dream was to someday build a brand-new Orthodox Church in Pittsfield, MA. With his dedication, personal efforts, passion and the incredible support of Fr. Barnabas Fravel and his Parishioners, all this came to fruition in 2013 with the Consecration of the Newly Built St. Nicholas Orthodox Church. During these years, Fr. Jozef’s heart never left the very Church from which he and his family were forcibly evicted. Upon learning that a new Orthodox Church was being planned at the same location of his former Church, Fr. Jozef took it upon himself to raise funds that would help to complete the Church’s construction. Another of Fr. Jozef’s dreams was realized by his visit in 2007 to witness one of the very first liturgies in the new Church. He was honored during that visit with several Awards: Title of Protojerej, Right to wear the Golden Cross, The Order of the Saint Cyril and Methodius was bestowed by His Eminence CHRISTOPHER, Archbishop of Prague, Metropolitan of the Czech Lands and Slovakia, and Keys to the City of Strazske, as presented by the Mayor . Fr. Jozef Petranin will be remembered as a dedicated and charitable man whose heart was always with his family and parish. He was known for his incredible humility and kindness. He was the person who would always greet you with a smile and a hug. The love he had for his family and especially 4 grandchildren was never ending. He will greatly be missed. Funeral Notice: Visitation will begin at The St. Nicholas Orthodox Church of Pittsfield, MA located at 1304 North St, Pittsfield, MA 01201 at 4:30 PM on Friday, March 13, 2020. The Funeral Service and Divine Liturgy will commence Saturday, March 14, 2020 at 9:30 AM at the St. Nicholas Orthodox Church. Interment will follow at Pittsfield Cemetery. In Lieu of flowers, donations in Fr. Jozef’s name may be sent to the St. Nicholas Orthodox Church of Pittsfield in care of the Dwyer Funeral Home, 776 North Street, Pittsfield, MA 01201. Donations CANNOT be made online, but may be made through the Dwyer Funeral Home.

Archpriest Jozef Petranin, 86, Pastor Emeritus of the Saint Nicholas Orthodox Church of Pittsfield, MA fell asleep in the Lord on Tuesday, March 10, 2020, surrounded by his loving family. Born in Lipova, in the former Czechoslovakia, the son... View Obituary & Service Information

The family of Jozef Petranin created this Life Tributes page to make it easy to share your memories.

Send flowers to the Petranin family.