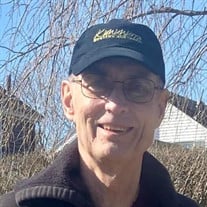 Mr. Keith E. Crouch, 79, of Pittsfield, passed away on Wednesday, June 30, 2021. Born on September 10, 1941, in New Underwood, South Dakota, and raised there on his family’s farm, he was the son of the late George and Bernice van Vleck Crouch. Keith attended schools in South Dakota and earned his master’s degree in physics from South Dakota State University. Following graduation, Keith enlisted in the United States National Guard, where he proudly served his country. In 1966, he brought his young family to Pittsfield, where he began working for General Electric. After 10 years with GE, Keith joined Lightning Technologies, Inc., where he worked as an electrical engineer until his retirement in 2010. Keith most loved spending time with his family and delighted in taking his children and grandchildren on road trips through the Badlands or camping on Cape Cod. He also enjoyed downhill skiing at Jiminy Peak, where he volunteered with the ski patrol for more than 20 years. In his spare time, Keith could be found working on household projects and tinkering with the family cars. Keith was active in his community. He was a member of the Men’s Group of the South Congregational Church, as well as a member of the IEEE Engineering Society. Keith is survived by his beloved wife of 57 years, the former Judy Brokke, whom he married on August 25, 1963. He leaves behind his children, Tim, Eric, Jeana, and Bindy Crouch, as well as six grandchildren, three great grandchildren and a fourth great grandchild expected in the coming month. He is also survived by his brother, Barth Crouch. Besides his parents, Keith was predeceased by his brothers, Kirk and John Crouch, and stepmother, Etta Crouch Funeral Notice: Funeral services for Mr. Keith E. Crouch will be Saturday, July 10, 2021, at 11 a.m. at the United Methodist Church of Lenox, with the Rev. Nami Yu officiating. A celebration of Keith’s life will follow in the church’s fellowship hall. In lieu of flowers, donations can be made to the Memorials Fund at the United Methodist Church of Lenox in care of the Dwyer-Wellington Funeral Home, 220 East St, Pittsfield MA 01201, in his memory. Donations CANNOT be made online, but can be made through the Dwyer-Wellington Funeral Home.

The family of Mr. Keith E. Crouch created this Life Tributes page to make it easy to share your memories.

Send flowers to the Crouch family.