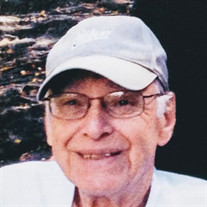 Mr. Kenneth M. Kellogg, 90, of Pittsfield passed away peacefully at his home on Saturday February 20th 2021 surrounded by his loving family. Born in Great Barrington on May 23, 1930, the son of the late Kenneth S. and Veronica Miller Kellogg. He graduated from Pittsfield High School in 1948. Ken served in the Navy until 1950 . For much of his career he worked at General Electric as a machinist where he retired in 1976 after 17 dedicated years . Kenneth enjoyed many things over the years including gardening, ham radio, repairing anything and everything, watching the Red Sox and the Patriots and spending time with his family. He was pre-deceased by his beloved wife of 58 years the former Eleanor Geerholt whom he married on May 13, 1961. Eleanor passed away in 2019. Kenneth is survived by his five children Patricia McCarron , Colleen Hassan (Roger),Susan Gable, Linda Trumble (Ron ) and Sally Higgins (Dan), he leaves behind six grandchildren Roger Hassan( Jackie), Gregory Hassan, Shauna Perras, Joshua Smith, Matthew Higgins (Kayla), Brian Higgins (Amber). Six great-grandchildren and his three sisters-in-laws Viola Kellogg, Toni Kellogg ,and Mildred Bunt. he also leaves behind his beloved dog Carley. Kenneth was pre-deceased by his granddaughter Jessica L.Gable ,his brothers William Kellogg, Bernard Kellogg, and his sister Eleanor mixer. The family would like to thank HospiceCare in the Berkshires for their compassion and care in this difficult time. Funeral Notice: A private graveside service for Mr. Kenneth M. Kellogg will be held at Pittsfield Cemetery. Public calling hours will be held on Thursday, February 25, 2021, from 2 p.m. until 4 p.m. at the Dwyer Funeral Home, 776 North Street, Pittsfield MA, 01201. In lieu of flowers donations may be made in his honor to the Berkshire Humane Society. Donations CANNOT be made online, but may be made through the Dwyer Funeral Home.

Mr. Kenneth M. Kellogg, 90, of Pittsfield passed away peacefully at his home on Saturday February 20th 2021 surrounded by his loving family. Born in Great Barrington on May 23, 1930, the son of the late Kenneth S. and Veronica Miller Kellogg.... View Obituary & Service Information

The family of Mr. Kenneth M. Kellogg created this Life Tributes page to make it easy to share your memories.

Send flowers to the Kellogg family.