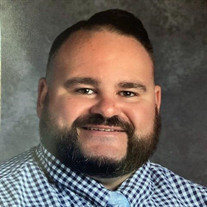 Mr. Kevin P. Harrington, 38, of Pittsfield, MA, passed away unexpectedly on Wednesday, November 13, 2019. Born in Pittsfield, MA, on October 28, 1981, Kevin touched more hearts in his 38 years than can be counted. The son of Kevin and Susanne Boudreau Harrington, Kevin graduated from Taconic High School in 2000. He furthered his education at Berkshire Community College, and then Westfield State University, where he graduated with his Bachelor’s Degree in Criminal Justice. Kevin went on to earn his Master of Education from Massachusetts College of Liberal Arts and later obtained his Administrative Secondary Degree. Kevin worked for 13 years as a Special Education teacher at his former high school, Taconic. He was also a peer resource counselor, another one of the many ways in which Kevin was able to provide support and encouragement to his students. Kevin was extremely active in the community. He was a member of the Monday Morning Quarterback Club, and a DARE camp counselor. He was particularly known for his love of sports. He was the Captain of both the Taconic High wrestling and football teams, and a member of their hall of fame. Kevin not only held the wrestling record for being the first to 100 wins, but also held the title for the first All-State win. He finished out his wrestling career with a final record of 100 wins and just 19 losses. Kevin’s passion for sports was apparent, and even after his personal playing career ended, he continued to spend much of his time coaching multiple teams. He was the coach of Taconic and CYC football, Babe Ruth baseball, CYC basketball, Taconic and Pittsfield High wrestling, and Taconic softball. Kevin was a longtime member of the Berkshire Nautilus, where he spent much of his free time exercising with his “second family.” While he was known by many for his talent and enthusiasm for athletics, the biggest piece of Kevin was by far his heart, as he showed a genuine love and care for all those around him. Though Kevin will be sorely missed, he will always live on through his family, friends, and each of the many whom he touched. Besides his wife of 13 years, the former Kellie Steele, whom he married at the Hillcrest Gazebo on July 23, 2006, Kevin is survived by both of his parents, Kevin P. Harrington and Susanne Harrington. He leaves behind his only daughter, Morgan Leighfield, his brother, Joseph Harrington (Caitlyn), and his beloved nephew, Owen Harrington. He is also survived by his aunts and uncles; Brian Harrington (Maureen Fitzgerald), Patricia Smith, and Jim Eastland (Ethel). Kevin leaves behind his cousin, Jeff Greb and his beloved godson, Wyatt J Underhill. He was predeceased by grandparents, Daniel and Irene Harrington, as well as his dear aunt and uncle, Mary and Michael Eastland. He is also predeceased by his great aunt, Anne Greb, and his cherished friend, James Underhill, father of his godson. Funeral Notice: A celebration of Kevin’s life will be held on Saturday, November 23, 2019 from 2 p.m. to 5 p.m. at the Elk’s Lodge, 27 Union Street, Pittsfield, MA 01201. The family asks that the staff and students of Taconic High School pay their respects and hour prior to this, from 1 p.m. to 2 p.m. In lieu of flowers, donations can be made to the Kevin P. Harrington Scholarship Fund in care of the Dwyer Funeral Home, 776 North St., Pittsfield, MA 01201 in his memory. Donations CANNOT be made online, but may be made through the Dwyer Funeral Home.

Mr. Kevin P. Harrington, 38, of Pittsfield, MA, passed away unexpectedly on Wednesday, November 13, 2019. Born in Pittsfield, MA, on October 28, 1981, Kevin touched more hearts in his 38 years than can be counted. The son of Kevin and Susanne... View Obituary & Service Information

The family of Mr. Kevin P. Harrington created this Life Tributes page to make it easy to share your memories.

Send flowers to the Harrington family.