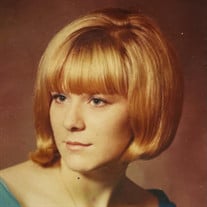 Mrs. Lynn Skowron, of Pittsfield, passed away at her home on Saturday, March 20, 2021, just days shy of celebrating her 67th birthday. Born in Gloversville, NY on March 31, 1954, she was the daughter of the late Robert and Dorothy Wilder Ellis. She graduated from Mayfield Central School in 1972. She later graduated from the nursing program at Berkshire Community College where she earned the title of Licensed Practical Nurse. For the majority of her career Lynn held various positions at Berkshire Medical Center. She also worked for the VNA, St. Mary's Hospital and most recently at Viale Florist in Pittsfield. She enjoyed being outdoors where she was especially fond of gardening, camping and spending time at Hampton Beach. She also cherished every moment spent with her grandchildren and her family. Lynn is survived by her beloved husband, Robert Skowron, whom she married on November 17, 2001. She also leaves behind her siblings Richard Ellis (Karen), William Ellis(Susan), Larry Ellis (Lisa), Michael Ellis (Jane Bovee), Margaret Duesler (Vern), Ronald Ellis (Linda) and her sister-in-law Meg Skowron. She is survived also by her children and grandchildren, Michelle and Howard Frasier (their children Elliot, Julia and Ada), Michael Alkinburgh and Lisa Gaudette (their son Jordan and Matthew, Kelsey and Brandon), Patricia and Nicholas Barnaby (their children Melayna and Avery), Noelle Skowron (Justin Lenski), Edward Skowron (Rebecca Argueta) as well as Maddie and Rosie. Besides her parents, she was predeceased by her brothers Wayne and Danny Ellis. Funeral services for Mrs. Lynn Skowron will be private. Public calling hours will be held today, Tuesday, March 23, 2021, from 3 p.m. until 6 p.m. at the Dwyer Funeral Home, 776 North Street, Pittsfield, MA 01201. In lieu of flowers, donations can be made to HospiceCare in the Berkshires in care of the Dwyer Funeral Home, in her memory. Donations CANNOT be made online, but may be made through the Dwyer Funeral Home.

Mrs. Lynn Skowron, of Pittsfield, passed away at her home on Saturday, March 20, 2021, just days shy of celebrating her 67th birthday. Born in Gloversville, NY on March 31, 1954, she was the daughter of the late Robert and Dorothy Wilder Ellis.... View Obituary & Service Information

The family of Mrs. Lynn Skowron created this Life Tributes page to make it easy to share your memories.

Mrs. Lynn Skowron, of Pittsfield, passed away at her home on...

Send flowers to the Skowron family.