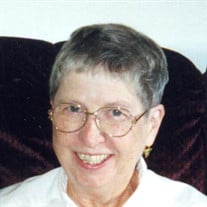 Margaret “Peg” Berger Lewis of Dalton, MA passed away on Wednesday, January 29, 2020, at Berkshire Medical Center after a valiant battle with cancer. Peg was born in Oak Park, Illinois and was adopted as an infant by Dr. John and Margaret Polson Berger. She attended schools in Oak Park until her senior year when the family moved to Glen Ellyn, where she graduated from Glenbard High. She received her BA degree in Elementary Education from Coe College in Cedar Rapids, Iowa. She did graduate studies at the University of Colorado and the University of Wisconsin. Peg taught school in Schaumburg, IL, Hoffman Estates, IL, Hakata, Japan, Ada, OH, and was a substitute teacher for many years in the Central Berkshire Regional School District. It was while teaching in Japan where she met her future husband, Ron, who was working there as a field engineer. They were married on February 5, 1957, when Ron returned to the states. This Wednesday would have been their 63rd wedding anniversary. Peg was active in the First Congregational Church of Dalton, teaching Sunday School, being a Deacon, and a member of the Monday Morning Crew. Peg was also active in Scouting, being a Den Mother, Den Mother Coach, and Committee Member for Pack 42 and Pack 43 and Troop 4. Peg and her husband spend many years touring the country in an RV where they were able to spend time with their children, grandchildren, relatives, and friends. She is survived by her husband, and three sons, Jeffrey (Michelle) of Dalton, Robert (Donna) of Los Angeles, Glenn (Noemi) of Silverdale, Washington. She also leaves behind her grandsons, Joshua Lewis (Paris) of Easthampton, David Lewis, of Pittsfield, Steven Lewis of Bainbridge, WA, and granddaughters, Nicole Carrico (David) of Silverdale, and Megan Lewis of Silverdale, and her great grandchildren, Allie, Quinn, Parker, Mia, and Luke. She leaves her five step grandchildren and nieces and nephews to whom she was very close. She is also survived by her sister-in-laws, Jane Berger and Betty Lewis. Peg was predeceased by her parents, her brothers, John and Bruce Berger, and her brother-in-law, William Lewis. The family would like to thank the personnel at BMC, Hillcrest Cancer Center, and the NVA nurses for their wonderful and kind treatment and to her many friends for their support and prayers. Funeral Notice: At Peg’s request, there will be no formal calling hours. A memorial service for Mrs. Margaret “Peg” Berger Lewis will be Wednesday, February 5, 2020 at 10 a.m. at the First Congregational Church in Dalton with the Rev. Henry Pasqual officiating. A celebration of life will follow at the Wahconah Country Club. Burial will be at a later date with her husband at the Massachusetts Veteran’s Memorial Cemetery in Agawam, MA. In lieu of flowers, donations can be made to the First Congregational Church of Dalton, or the Dalton Lions Club in care of the Dwyer-Wellington Funeral Home, 525 Main Street, Dalton, MA 01226 in her memory. Donations CANNOT be made online, but may be made through the Dwyer-Wellington Funeral Home.

Margaret &#8220;Peg&#8221; Berger Lewis of Dalton, MA passed away on Wednesday, January 29, 2020, at Berkshire Medical Center after a valiant battle with cancer. Peg was born in Oak Park, Illinois and was adopted as an infant by Dr. John and... View Obituary & Service Information

The family of Mrs. Margaret "Peg" B. Lewis created this Life Tributes page to make it easy to share your memories.

Send flowers to the Lewis family.