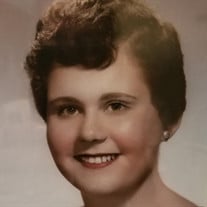 Mrs. Marie H. Walz, 83, of Pittsfield, passed away on Saturday, December 14, 2019, surrounded by family and holding the hand of the love of her life. Born in Pittsfield, MA, on December 16, 1935, the daughter of the late Frank and Lillian Bertrand Archey, she graduated from St. Joseph High School as well as the former Notre Dame and St. Mary’s schools. Marie was a bookkeeper for several local businesses over the years. Once Marie and her husband began raising 6 children, she became a stay at home mom and sold Avon as one of their top sellers in the Morningside community. She could be seen walking through the neighborhood with at least 2-3 kids in tow pulling a red wagon delivering her products! Even Frank helped out with deliveries! Marie was very active in her community. She was a communicant of St. Charles Church in Pittsfield as well as the former St. Mary’s the Morning Star Church. Additionally, she and her husband Frank, belonged to both the Berkshire and Lanesborough Pioneers Square Dance Club. In her younger years she often frequented Broyles Arena (where she and Frank met) to roller skate. Marie loved to read, consuming comic books as a child, romance novels and crossword puzzles as an adult and watching old scary movies. She knew and sang every show tune from every musical made! Amongst many other things, she was extremely fond of knitting and sewing clothes for her kids as well as their Barbie Dolls, and the cookie jar was always full! Marie loved flowers and could often be found planting in her garden. In later years she attended BMC cardiac rehab along with Frank to exercise and could be seen walking the track at Belanger Park with him on any given day as long as it wasn’t windy! Besides her beloved husband, Frank Walz, whom she married on May 11, 1957 at St. Mary’s Morning Star, Marie is survived by her children, Kenneth Walz (Donna), Kathleen Bobal (Wayne), James Walz (Christine), Mary Walz-Watson, Michele Wells (Jonathan) and Wendy Walz. She also leaves behind her brother, Frank Archey and his wife, Marilyn and niece Sondra, nine dear grandchildren and eight great grandchildren. She had an abundance of love for each and every one of them. Marie was predeceased by her infant daughter, Ann Walz, who passed in 1961. The family wishes to thank all the compassionate nurses and aides from Hospice of the Berkshires. Funeral Notice: Funeral services for Mrs. Marie Walz will be Friday, December 20, 2019 with a Liturgy of Christian Burial at 10 a.m. at St. Charles Church, celebrated by the Rev. A. Peter Gregory, Pastor Emeritus and con-celebrated by the Rev. John Tuohey. Calling hours will be Thursday, December 19, 2019 from 4.p.m. until 7 p.m. at the Dwyer Funeral Home. In lieu of flowers, donations can be made to the Alzheimer’s Association in care of the Dwyer Funeral Home, 776 North St., Pittsfield, MA 01201 in her memory. Donations CANNOT be made online, but may be made through the Dwyer Funeral Home.

Mrs. Marie H. Walz, 83, of Pittsfield, passed away on Saturday, December 14, 2019, surrounded by family and holding the hand of the love of her life. Born in Pittsfield, MA, on December 16, 1935, the daughter of the late Frank and Lillian Bertrand... View Obituary & Service Information

The family of Mrs. Marie H. Walz created this Life Tributes page to make it easy to share your memories.

Send flowers to the Walz family.