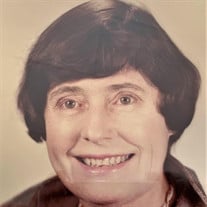 Marjorie E. Hickey, age 97, formerly of Elberon Avenue, passed away on Wednesday, January 20, 2021, at Berkshire Place. Her often phrase after losing all eleven siblings was being "Last of the Mohegans". She was born on March 26, 1923 on Daniels Avenue in Pittsfield to Patrick Hugh O'Donnell and Catherine Louise Nelligan. Her senior year of high school, 1941, was shared with General Electric's shipping department's need to fill workers shuffled in the uncertainty of a war contained in Europe.In 1955, she married Robert J. Hickey of Union Street, Pittsfield. After his death in 1965, she returned to work as an agent for Northwestern Mutual Life. Next she worked as receptionist at St. Joseph's Church rectory, and then as a microfilmer in General Electric's drafting department, retiring in 1984. Marjorie was predeceased by her eleven siblings and their spouses: Rose Shepardson (Lester), Mary Hebert (Edwin), James (Myldred Gaylord), Catherine Louise Walker (William), Sarah Grace Williams (Alden), William (Dorothy Gross), Roger (Catherine Cushing), John, Alice dying at birth, Alice Frances Sykes (Robert), and Claire Byrnes (George).Marge and Bob's marriage spanned ten years, and they each loved their in-laws. She was also predeceased by Florence and John Duquette, Mr. and Mrs. Edward Hickey, Francis Hickey, Father James Hickey S.J., Rita and Oliver Moyer, Dorothy and William Condon, and Mary and Leonard Lally. In 2008, Marjorie self-published a pictorial family history of her parents and siblings. The book was titled "From The Berkshire Beginnings Came The O'Donnells". It was the next generation from her uncle Raymond Nelligan's 1977 book. She is survived by her son, Robert Jr., forty-four nieces and nephews, three cousins, and no spring chickens. A special thanks for the last two years of her life goes to all the dedicated caregivers at Berkshire Place in Pittsfield. Funeral Notice: There will be no formal calling hours for Mrs. Marjorie E. Hickey. In lieu of flowers, donations in Marjorie's memory can be made to St. Joseph's Church in Pittsfield, or the Sisters of St. Joseph, 577 Carew Street in Springfield, MA 01104.

Marjorie E. Hickey, age 97, formerly of Elberon Avenue, passed away on Wednesday, January 20, 2021, at Berkshire Place. Her often phrase after losing all eleven siblings was being "Last of the Mohegans". She was born on March 26, 1923 on Daniels... View Obituary & Service Information

The family of Mrs Marjorie E. Hickey created this Life Tributes page to make it easy to share your memories.

Send flowers to the Hickey family.