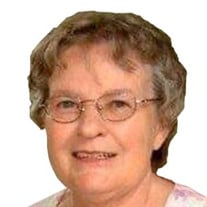 Mrs. Mary Ida Blackstone, 82, formerly of 718 Pecks Road, passed away on Thursday, April 30, 2020 at Mount Greylock Extended Care Facility. Born on April 25, 1938 in Putney, VT , the daughte3r of the late Guy and Gladys Vaine Stockwell, she graduated from St. Michael’s High School in Brattleboro, VT. On August 10, 1957, she was joined in holy matrimony to Elvin “Whitney” Blackstone. Mary was a CNA and medical receptionist who was most recently employed at Berkshire Medical Center. She treated all her patients with dignity and understanding. Mary had a number of interests, including gardening, sewing, art, camping, bike riding, swimming and hiking. She shared these interests with her children, grandchildren and great grandchildren. Mary was selfless when it came to family. She was the first to lend a hand to anyone in need. She helped raise her two nieces, Gladys Barlow and Marianne Rice. She was a true matriarch, keeping the family together even as it grew in numbers, with her holiday celebrations and camping trips to Rocky Neck, CT. Mary’s love for her family members was non-judgmental and unconditional. She was a devote Christian. Over the years, Mary taught Sunday school, painted, repaired and cleaned churches as needed. The most recent church she attended was Calvary Chapel of the Berkshires. Mary was predeceased by her beloved husband of over 50 years, “Whitney” Blackstone, who passed on October 25th, 2008. She was also predeceased by a brother, Paul Stockwell, and sister, Undine Weeks. She is survived by her children Anne M. Lauren (Chris D. Del Gallo) of Pittsfield, MA, John A. Blackstone of Lanesborough, MA and Teresa L. Blackstone (Daniel J. Ling) of Middle Grove, NY. She leaves behind siblings Erwin Stockwell (Mary) of Brattleboro, VT, Fred Stockwell of Putney VT, and Irma Robertson (Stanley) of Hinsdale, NH. Also left behind are six grandchildren, six great-grandchildren, one great-great grandchild, and several nieces and nephews. We will miss her dearly. Words cannot express how loving and caring she was. Funeral Notice: As her family considers the COVID-19 safety concerns, a celebration of life for Mrs. Mary Ida Blackstone will be held at a later date. In lieu of flowers, donations can be made to Calvary Chapel in care of the Dwyer Funeral Home, 776 North St., Pittsfield, MA 01201 in her memory. Donations CANNOT be made online, but may be made through the Dwyer Funeral Home.

The family of Mrs. Mary Ida Blackstone created this Life Tributes page to make it easy to share your memories.

Send flowers to the Blackstone family.