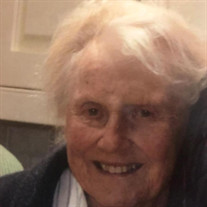 Mary Jane Caliento (Oct. 29th, 1924 – March 26th, 2022) lived a beautiful life. She was a quiet, dignified resourceful woman who gave abundantly and asked for little in return. She was adored by her husband and children and everyone who knew her. She was born Mary Jane Warren to Theron and Edna Rudin Warren, the 7th of 8 children. Her family owned and operated the 250-acre Warren Dairy Farm in Dalton since the 1880’s providing milk to the community. Her earliest memories were following her father around on the farm and selling corn on the family farm stand. She attended and graduated from Dalton public schools and after high school, she boarded a train to California to attend Pasadena Junior College where she earned a degree in fashion design. After college she returned to Dalton where she met a dashing soldier on leave, Tom Caliento, at the Dalton fair and corresponded with him throughout the war years. While home in Dalton, she took a job at GE, as so many did, to help in the war effort. After the war, she and Tom reunited, fell in love, and married. For the next several years, Tom and Mary Jane traveled the country as Tom was pursing a career in baseball. When it was clear he would not make it to the Majors, they returned home to the Warren Farm where Mary Jane chose to stay at home and raise their 8 children instead of pursuing a career in design. She continued her passion by making beautiful dresses for her girls that they still reminisce about today. The home they built together was still the home she lived in until her passing. Mary Jane was well known for her love of gardening. She completed the Master Gardening course in 2002 after which she volunteered her time teaching others about soil care and insect and disease control. Her farming background served her well as she was an outstanding horticulturist. She kept a large vegetable garden until her 96th year and her flower gardens were enjoyed by all. For over 50 years, Mary Jane was a member of the Dalton Historical Commission and served as the Commission’s chairman for several. She was pivotal in establishing Dalton’s 1 Historic District, the placing of the town’s 3 historic cemeteries on the National Registry of Historic places, creating the Fitch-Hoose House Museum and maintaining Dalton’s historic inventory. Mary Jane attended church at both the First Congregational Church and Berkshire First Church of the Nazarene and loved following Boston sports teams. Mary Jane was predeceased by her beloved husband of 62 years Thomas Caliento, her son Thomas “Peels” Caliento and her son-in-law Jack Sargent. She is survived by her children Carolina and James Galliher, Sarah Caliento, Teressa and Mark Penny, Lousia and Peter Horth, Laura and John Pratt, Joseph and Anne Caliento, Lisa Sargent, 18 grandchildren, 28 great grandchildren and 1 great-great-grandchild. Funeral Notice: Funeral services for Mary Jane Warren Caliento will be Friday, April 1st at 11am at the Berkshire First Church of the Nazarene. Burial will follow at Main Street Cemetery. In lieu of flowers, donations in her memory can be made to Friends of the Hoose House, in care of the Town Hall of Dalton, 462 Main Street, Dalton MA 01226.

Mary Jane Caliento (Oct. 29th, 1924 &#8211; March 26th, 2022) lived a beautiful life. She was a quiet, dignified resourceful woman who gave abundantly and asked for little in return. She was adored by her husband and children and everyone who... View Obituary & Service Information

The family of Mrs. Mary Jane Caliento created this Life Tributes page to make it easy to share your memories.

Send flowers to the Caliento family.