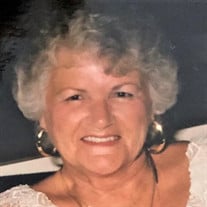 Mary A. (Lambert) Carhart, age 95, of Pittsfield, MA, passed away peacefully on Tuesday, January 26, 2021, at Berkshire Place. Born in Brooklyn, NY on August 15, 1925, she was the daughter of the late Joseph and Emma Brooks Lambert. In 1949 she married Randall O. Carhart, a WWII vet who had been severely wounded in the war. Mary was credited by many for being the single most important reason for his recovery after those traumatic months in the hospital. Randall Carhart passed on May 25, 2010 at the age of 84. During her early marriage, Mary was a devoted and supportive wife and a nurturing, wonderful mother to five children. She was the "Mom" of the neighborhood who all of the kids came to hang out with, coming to see her as much as or more than her own. Many of those childhood friends continued to make special trips to visit her, even 50 years later. She was the Cub Scout den mother and the Girl Scout leader. She would chaperone school and church outings, grill the altar boys on their Latin, and chauffer all of the kids all over the place. And she always did it with a smile and love in her heart for all. Mary was a sixty-year, faithful communicant of Sacred Heart Church where she also struck long-lasting friendships with several priests. For many years, Mary and Randall were season ticket holders and regular tailgaters at New England Patriots football games where she was always the life of the party. However, her passion was cruising the world with her soulmate (and a couple of those priests from time to time), embarking on twenty-nine cruises, and travelling over 80,000 nautical miles with the crew of Holland America, many of whom knew them both on sight. This love of adventure on the water also had a local flavor with them on their Sea Ray boat on the lakes of the Berkshires and beyond. She was an avid bowler for many, many years, including up to age 93, with her beloved Calendar Girls. Mostly, family meant everything to Mary, her being the matriarch of the Brooks side of the family. She loved being around her children and grandchildren and took exceptional delight in her many great-grandchildren. Second to her family, Mary loved being around her friends and was well known in the community. She was exceptionally adept at constantly making new friends. She was a frequent fixture at all of the fine dining establishments in the Pittsfield area. It was a rare occasion that Mary was not happily greeted by owners and staff when she arrived. She is survived by three sons, Kevin J. and Colleen of Tyngsboro, MA , John R. and Denise of Pittsfield, and Randall O., Jr. and Cherryl of Apex, NC; a daughter, Kathy M. Fantauzzi of Malta, NY; a son-in-law Michael A. Smachetti of Belchertown, MA. She also leaves twelve grandchildren and fifteen great-grandchildren. She was predeceased by a daughter Deborah A. Smachetti, of Belchertown, MA, son-in-law John B. Fantauzzi of Malta, NY, three brothers, John (Jack), Joseph, and Robert Lambert. Mary’s family would like to extend their sincere gratitude to the staff at Berkshire Place for their professional and loving care during the most difficult circumstances this last year, for which they will be forever grateful. Funeral Notice: DUE TO THE INCLEMENT WEATHER, FUNERAL SERVICES FOR MRS. MARY A. CARHART WILL NOW BE SATURDAY, FEBRUARY 6, 2021, with a Liturgy of Christian Burial at St. Joseph Church, celebrated by the Msgr. Michael A. Shershanovich, Pastor. Burial will follow at St. Patrick’s Cemetery in Coeymans, NY. A public celebration of Mary’s life will be held at a later date, when Covid restrictions are lifted and all are able to safely gather. In lieu of flowers, donations may be made to Mary’s favorite charity, Soldier On in Pittsfield MA, or any number of dementia related charities, in care of the Dwyer Funeral Home, 776 North Street, Pittsfield, MA 01201. Donations CANNOT be made online, but may be made through the Dwyer Funeral Home.

Mary A. (Lambert) Carhart, age 95, of Pittsfield, MA, passed away peacefully on Tuesday, January 26, 2021, at Berkshire Place. Born in Brooklyn, NY on August 15, 1925, she was the daughter of the late Joseph and Emma Brooks Lambert. In 1949... View Obituary & Service Information

The family of Mrs. Mary A. Carhart created this Life Tributes page to make it easy to share your memories.

Send flowers to the Carhart family.