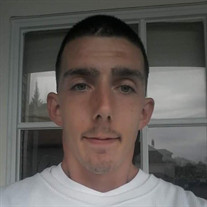 What thrives in the darkness must be defeated in the light. On Wednesday, April 17, 2019, the illness and addiction that stole so much, also took his life. Michael Vincent Houle, 30, was born in Pittsfield, MA on October 23, 1988, to Steven W. and Judy (Sanginetti) Houle. His parents wanted nothing more than for their son to be well and served as constant reminders that his light was meant to be bright. Michael's drive to be a good father to his children and someone they would be proud of will now persist through Natalie Hayford and their children, Gianna Lynn and Michael Vincent Houle, and also, Mia Kimber. His unwavering loyalty to his siblings and love of the great outdoors will never be forgotten by Tina Sanginetti, Jeffrey Houle, Melissa Houle, and Dave Davies, who he considered a brother. Michaels's gentle, quiet, and playful spirit will forever be embraced by his nieces and nephews Tianna, Vincent, Alicia, Dominic, Brendan, Joseph and Annaleigh. His strong work ethic, strength, and skill will especially be remembered by friends Jason Dargi and Tim D’elia. Michael leaves a host of aunts, uncles, cousins, and an extended family of friends to remark on his eagerness and talent to help anyone and fix anything that needed it. His memory will be cherished by his Grandmother Anita M. Houle of Pittsfield. Michael was preceded in death by his cousin Ryan Ellis Wood and his grandparents; Paul W. Houle, Virginia A. Sanginetti and Vincent “Gig” Sanginetti who Michael always said was his "best friend." Our hope is not that Michael’s life be defined by addiction, and at the same time, that his struggle not go unspoken. Our hope, is that Michael will be remembered as the loved and loving father, son, grandson, brother, nephew, uncle, cousin, and friend who never hesitated to end a conversation with “I love you.” Funeral Notice: Funeral services for Michael Vincent Houle will be private and at a later date. In lieu of flowers, donations can be made to: Houle Childrens Educational Fund, in care of the Dwyer Funeral Home, 776 North St., Pittsfield, MA 01201 in his memory.

What thrives in the darkness must be defeated in the light. On Wednesday, April 17, 2019, the illness and addiction that stole so much, also took his life. Michael Vincent Houle, 30, was born in Pittsfield, MA on October 23, 1988,... View Obituary & Service Information

The family of Michael V. Houle created this Life Tributes page to make it easy to share your memories.

What thrives in the darkness must be defeated in the light. On...

Send flowers to the Houle family.