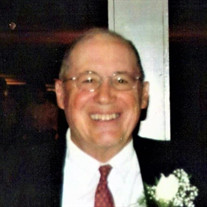 Michael Salvatore Messina passed away peacefully on June 28, 2021. He had been residing in the Springside Nursing Home in Pittsfield. Michael is pre-deceased by his beloved wife, Margaret, who died in February 2020. He is survived by his children: Daniel (Marie), Catherine Quinn (Jack), James (Amanda), Margaret Larkin (Joseph), and Stephen (Lisa). He leaves behind a brother, Frank, and sisters Anne and Florinda, as well as his sister in law, Joan, and brother in laws, Bernard Sturgeon; and David Waymire, who predeceased him. Michael was an adoring grandfather to 13 grandchildren: Michael, Lauren, Caitlin, Dempsey, Brodie, Jennifer, Matthew, Meghan, Olivia, Maeve, Conor, Mark and Cal. He was proud to be great-grandfather to Pierce and Maeve O’Shaughnessy, Ella and Vaughn Messina, Molly Messina, and Reidy and Rory Quinn. Michael was born on January 15, 1933, in Pittsfield, to Anna and Salvatore Messina. He graduated from St. Joseph High School and went on to become a tool maker apprentice at General Electric. The majority of his professional career was spent at Beloit Jones, a company that produced large scale machines for paper making, where he was a Supervisor of Standards and Methods. He married the love of his life, Margaret Guiltinan, in 1954 and went on to raise their children in Pittsfield. Mike had many hobbies and interests over the course of his life: coaching Little League, refereeing high school and college football games, collecting vintage movie posters and cast-iron toys, playing golf, and especially, wood working and building furniture. There was many a time one of his children put in a request for a bookshelf or bunk beds, and he happily obliged. Mike was a lifelong Red Sox fan and carved out a spot in front of the TV every Saturday in the fall to watch the Fighting Irish of Notre Dame football. He was a constant presence at all his Pittsfield grandchildren’s sports games. Family was paramount for both Mike and Peg, and they rarely missed a special occasion involving their grandchildren, no matter the distance. When each of his grandchildren were born, Mike prepared a “time capsule” of the year’s events, to be opened when they turned 21. He cherished them all. During their retirement, Mike and Peg traveled to Europe with his brother and sister in law, Frank and Joan. They spent many years wintering in Florida, where Mike, especially, enjoyed a break from the cold Berkshire winters. Mike was an adventurer when it came to food, always ready to sit down for a good meal, and to try new and interesting foods when he traveled. He was proud of his Italian heritage and his Christmas antipasto. Michael was a life-long communicant of St. Marks Church, where he served as a lectern for many years. He now resides in God’s embrace, with his wife beside him. Funeral Notice: Funeral services for Mr. Michael Salvatore Messina will be Friday, July 2, 2021, with a Liturgy of Christian Burial at 10:30 a.m. at. Mark’s Church, celebrated by the Rev. Christopher Fedoryshyn, Pastor. Entombment at St. Joseph Cemetery will follow. There will be an hour of visitation prior to the service from 9 a.m. to 10 a.m. at the Dwyer Funeral Home, 776 North Street, Pittsfield, MA 01201. In lieu of flowers, donations can be made to the Alzheimer’s Association in care of the Dwyer Funeral Home, 776 North Street, Pittsfield MA 01201. Donations CANNOT be made online, but may be made through the Dwyer Funeral Home.

Michael Salvatore Messina passed away peacefully on June 28, 2021. He had been residing in the Springside Nursing Home in Pittsfield. Michael is pre-deceased by his beloved wife, Margaret, who died in February 2020. He is survived by his children:... View Obituary & Service Information

The family of Mr. Michael S. Messina created this Life Tributes page to make it easy to share your memories.

Send flowers to the Messina family.