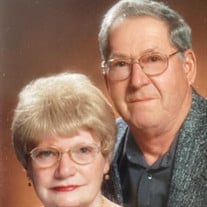 Mr. Stephen A. Pytko, Jr., 88, of Pittsfield, passed away on February 4, 2021. Born on April 1, 1932, he was the son of the late Stephen and Frances Gurski Pytko. Mrs. Joan Hillard Pytko, 90, also of Pittsfield, passed away on March 22, 2021, shortly after her beloved husband, Stephen. Born on December 27, 1930, she was the daughter of the late John and Margaret Monroe Hillard. Steve was a Korean War veteran. He enlisted in the army in 1952, where he proudly served his country until 1954. After his time in the military, he worked for the City of Pittsfield as the supervisor of the Highway Department for 40 years. Joan worked as an auditor for Union Federal, where she happily dedicated 25 years of service. Steve and Joan were both devoted to their faith. They enjoyed spending time with friends and family, and both loved to golf. While Steve and Joan had their fair share of individual interests, they were inseparable and at their happiest when with one another. Steve and Joan are survived by their daughter, Christine Pero (George Hover) and their son David Pytko. They leave behind their grandsons, Steve Pero, Joseph (Erin Jerome), Paul, and Michael Zwingelstein (Jessica). Steve and Joan leave behind their great grandchildren, Kalle, Lucus, Kaitlin, Michael, Jr., Braden Zwinglestein, and Brett Pero, Steve’s siblings, Monica Diefendorf and Bernadette Johnson, of Florida. They also are survived by Joan’s brother, John Hillard, of WA, as well as many other dear nieces and nephews. Steve and Joan were predeceased by Steve’s sister, Ursula Ford, of Florida. The family of Steve and Joan would like to extend their sincere gratitude to both Williamstown Commons and HospiceCare in the Berkshires for their outstanding love and care throughout this difficult time. Funeral Notice: A private graveside service will be held for Mr. and Mrs. Stephen and Joan Pytko. In lieu of flowers, donations can be made to HospiceCare in the Berkshires in care of the Dwyer-Wellington Funeral Home, 220 East Street, Pittsfield, MA 01201, in their memory. Donations CANNOT be made online, but may be made through the Dwyer-Wellington Funeral Home.

The family of Mr. and Mrs. Stephen and Joan Pytko created this Life Tributes page to make it easy to share your memories.

Send flowers to the Pytko family.