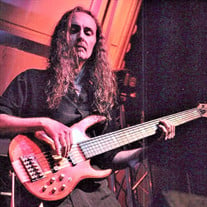 Mr. Nathan D. Raimer of Pittsfield, passed away on Friday, June 25, 2021, 5 days after celebrating his 29th wedding anniversary. He was born in Pittsfield MA on April 12, 1967, the son of the late Barbara A. Bird. Nathan was an amazing musician who could play any instrument. He started out as a child playing guitar in his step-father's country band, then played bass professionally from his early teens until the day he passed. He was in many bands over the years, but is best known as the bass player in the Leon Savage Band. His current work was in the studio with Emerald Odyssey, where he not only played bass but also was the producer and chief sound engineer as owner of N8 Studio. Nathan also owned Raimer's Furniture Repair and Restoration since 2001 where his talent with carving, coloring and veneer work was well known throughout the antique and auction community. He also excelled at finish work in his home, but his passion was restoring antique furniture. Nathan was a soft-spoken man who excelled at everything he put his analytical mind to. Anything electrical, mechanical, all household repairs, cooking, computers, he gave it 110%. He also had a special connection with animals and enjoyed interacting with all of the birds and wildlife that passed through his backyard. He loved to ride his motorcycle exploring the hill towns with his wife, but he especially enjoyed traveling and was thrilled to celebrate his 50th birthday on the same day as his best friend's 60th birthday, Francis Chip Lampro in Las Vegas. Nathan is survived by his beloved wife, Cindy Shogry-Raimer whom he met in August of 1988 and married on June 20, 1992. He is survived by his siblings, Karen Raimer Goss (Kelly) and John Raimer (Deborah) of Inverness, FL, Daniel LoPresto (Sandy) Stanardsville, VA, Christopher Bird of Pittsfield, Jerry Bird of Goshen, Candy LaFlam of Easthampton, half brother Russell Raimer (Donna) of Southbridge, half sister Brenda Trierweiler of Sheffield MA. His brother-in-law George Shogry (Sharon) of Pittsfield, numerous nieces, nephews and his band brothers from the Leon Savage Band and Emerald Odyssey. Besides his mother, he was predeceased by his brother, Karl Raimer Jr. Funeral Notice: Funeral services for Mr. Nathan D. Raimer will be Friday, July 2, 2021, at 1:30 p.m. at the Dwyer-Wellington Funeral Home, 220 East Street, Pittsfield, MA 01201. Burial will follow at St. Joseph Cemetery. Calling hours at the funeral home will be Thursday, July 1, 2021, from 4 p.m. until 6 p.m.. In lieu of flowers, donations in his memory may be made to Berkshire Humane Society, in care of the Dwyer-Wellington Funeral Home, 220 East Street, Pittsfield MA 01201. Donations CANNOT be made online, but may be made through the Dwyer-Wellington Funeral Home.

Mr. Nathan D. Raimer of Pittsfield, passed away on Friday, June 25, 2021, 5 days after celebrating his 29th wedding anniversary. He was born in Pittsfield MA on April 12, 1967, the son of the late Barbara A. Bird. Nathan was an amazing musician... View Obituary & Service Information

The family of Mr. Nathan D. Raimer created this Life Tributes page to make it easy to share your memories.

Send flowers to the Raimer family.