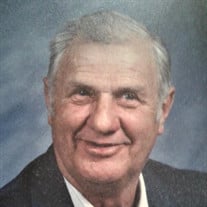 Mr. Newton F. Perkins, Jr., 92, of New Lebanon, NY, passed away at his home on Monday, December 7, 2020, surrounded by his loving family. Born in Foster, RI, on May 6, 1928, the son of the late Newton and Julia Cornell Perkins, he graduated in 1946 from Killingly High School in Danielson, CT. For much of his career, Newton worked as a Superintendent for many construction companies, building everything from bridges to schools. He was also the owner of “NewMar Arabians” where he bred Arabian Show Horses. Additionally, Newton and his wife Marge owned a Tack Shop at their farm. He was always an active participant in his community. He was a member of the Congregational Church in New Lebanon and a member of the Hudson Valley Arabian Horse Association. Newton was an avid hunter with an eagle eye. He enjoyed his family, horses, and the outdoors. Newton was predeceased by his beloved wife of 50 years, the former Margaret Murphy, whom he married in 1964. He is survived by his children, Carol Cooper Ryley, Gary Perkins, Craig Perkins, Mark Perkins, and Scott Perkins. He leaves behind his grandchildren, Benjamin Cooper, Matthew Cooper, and Jacob Perkins, as well as his great grandchildren, Kaya Cooper, Cassie Cooper, Clover Cooper, Julia Cooper, Nathaniel Cooper, and Hannah Perkins. Newton is also survived by his sister, Eleanor Tatagolia. Besides his wife and parents, Newton was predeceased by his grandson, Samuel Cooper, and his sister, Marjie Hammond. Funeral Notice: A graveside service for Mr. Newton F. Perkins, Jr., will be Friday, December 11, 2020, at 11 a.m. at Riverside Cemetery in Lanesborough MA, with the Rev. William Furey officiating. In lieu of flowers, donations may be made to the American Cancer Society and the Columbia-Greene Humane Society, in care of the Dwyer Funeral Home, 776 North St., Pittsfield, MA 01201 in his memory. Donations CANNOT be made online, but may be made through the Dwyer Funeral Home. Beneath please find an "ODE TO NEWT": He was born on the eve of a new Model A, not knowing the changes on the way. His roots were Rhode Island and Canterbury too; a horse, a cow, and chickens a few. He played a little football, knocked heads with a few, known to tackle and hit like a mule. He liked swing music and knew how to dance. God and Country, a little romance. His collar was blue, his pants were stained; hard work was the norm, his back was in pain. He cut some trees and bent some nails, waiting to receive a check in the mail. From a ‘56 Ford to a Mercury Park Lane, he always drove the back roads to Maine. He shoveled shit and he stacked the hay. Life was good on this glorious day. From the coast of Maine and the potato fields too, Dixfield was calling, Mt. Washington too. His stallion was white, the ribbons were blue. How much fun they had showing Irka and Buck too! His truck was a Ford, he loved Red, White & Blue. He flew the flag for freedom, for America tried and true. He loved his children and family too--not easy to show it, a trait may be true. He ate like a horse and snored like a train. Nearly drove his loving poor wife insane. He counted the deer and black bear the same. The Moose was elusive, but he spotted them too. He would tell you stories of lore and fame; the truth might be stretched by a yard or a name. He could see like an Eagle, bad news for his prey. The sun is shining on this glorious day. He had favorite diners and never a chain, he could tell you how to get there by road, not by plane. He was stubborn, hardheaded, and could be a pain, but the Dad we all had and loved just the same. His fashion was cowboy, belt buckle and hat, plaid and bolo and boots to match. He liked to talk of things in the past, the price, the challenge, a memory unmatched. His hands were rough and his hair was gray. Trying to tell you the only way. His knees grew weary and he walked with a cane, often smelling like a tube of BenGay. At 92, still sharp as a tack, not wanting a handout or help with a task. We love him, will miss him, and never forget: that Newt’s in heaven on that you can bet. Rest in Peace and Happy Trails Not far from the tree.

Mr. Newton F. Perkins, Jr., 92, of New Lebanon, NY, passed away at his home on Monday, December 7, 2020, surrounded by his loving family. Born in Foster, RI, on May 6, 1928, the son of the late Newton and Julia Cornell Perkins, he graduated... View Obituary & Service Information

The family of Mr. Newton F. Perkins, Jr. created this Life Tributes page to make it easy to share your memories.