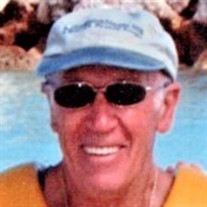 Norman J. Bessette, 86, of Dalton, MA, passed away at home on Friday, July 17, 2020, after several months of declining health. Norman died peacefully with his beloved wife Lois and his family by his bedside. Norman was born in North Adams on November 23, 1933 to the late Dorothy and Leo Bessette. In 1953, Norm joined the Air Force, proud to serve his country. He married the woman of his dreams, Lois Mann on June 7, 1957. Together they began a lifelong journey of public service and community involvement. He was a Pittsfield Police officer for over 30 years, rising to the rank of Lieutenant prior to his retirement in 1990. Not to be outdone, Lois worked as a Public Health nurse for over 50 years and continues to volunteer to this day as treasurer of the Bishop Memorial Alumni Association. Norman spent the majority of his professional career in law enforcement in some fashion or another; Pittsfield Police Lieutenant, Berkshire County Sherriff's Department, Security Guard for Berkshire Armored Car Service, Personal Body Guard for international dignitaries and, as an accomplished marksman, he was a certified firearms instructor for the State of Massachusetts. After his retirement, he pursued a diverse list of occupations and avocations. He worked as a clerk in the mailroom for TD Bank, was a frequent courtesy driver for snowbirds in the Berkshires, delivering their vehicles to and from Florida and worked as a driver for Haddad Motors. He made daily trips to his second home in Pittsfield, Berkshire Nautilus. He won several weightlifting competitions in his seventies, often at the expense of his much younger competition. Norm was the first to volunteer for whatever organization or cause needed him at the time, pit crew at the Josh Billings Runaround, bartender at local brew fests, dutiful playmate of his great granddaughter and buddy Sophia and au pair for his favorite four legged granddaughter, Sadie, just to name a few. Regardless of his stage of life, Norm (Bump) always felt his true calling and most important job on earth was that of a family man, husband, father, grandfather and great grandfather. As such, he is survived by his wife of 63 years, Lois Mann Bessette, four children: Mark Bessette and his wife Julia, Michele Bessette and her partner Roger Martin, Melanie Bessette and her husband, Paul Fortini and son Michael Bessette. He also leaves behind his dear sister-in-law, Carol Gendreau. Additionally, he was blessed with several grandchildren: Shaun, Christopher and Aimee Bessette, Caitlyn Lyon (Christopher Lyon), Matthew Bessette and Nicholas Martin. His three great granddaughters are Sophia, Savannah and Riley Bessette. Norman is survived by many dear nieces and nephews, as well. In addition to his parents, he was predeceased by his brother Roland Bessette. Funeral Notice: Funeral services for Mr. Norman J. Bessette will be Friday, July 24, 2020 with a Liturgy of Christian Burial at 11:30 a.m. at St. Agnes Church, 489 Main Street, Dalton, MA, 01226, celebrated by the Rev. Christopher Malatesta, Pastor, and concelebrated by the Rev. A Peter Gregory, Pastor Emeritus of St. Charles Church. For all those who would like to view the service through a live webcast, please contact the Dwyer Funeral Home by 4 p.m. on Thursday, July 23, 2020. Burial with full military honors will follow at St. Joseph's Cemetery. Calling hours will be held on Thursday, July 23, 2020, from 4 p.m. until 7 p.m. at the Dwyer Funeral Home, 776 North St, Pittsfield, MA, 01201. For those who have inquired or are interested, donations in lieu of flowers may be made to the Eleanor Sonsini Animal shelter, Tufts School of Veterinary Medicine in memory of Sadie or the Jimmy Fund in care of the Dwyer Funeral Home. Donations CANNOT be made online, but may be made through the Dwyer Funeral Home.

Norman J. Bessette, 86, of Dalton, MA, passed away at home on Friday, July 17, 2020, after several months of declining health. Norman died peacefully with his beloved wife Lois and his family by his bedside. Norman was born in North Adams on... View Obituary & Service Information

The family of Mr. Norman J. Bessette created this Life Tributes page to make it easy to share your memories.

Send flowers to the Bessette family.