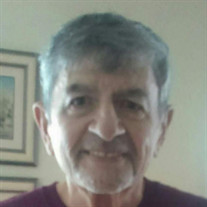 Mr. Paul D. Petrides, 74, of Pittsfield, passed away on Thursday, April 23, 2020. Born inBrockton, MA, on September 25, 1945, the son of the late Peter Petrides and June Dorgan Fortes,he graduated from Brockton High School and later attended classes at Quincy Junior College and Suffolk University. Paul was a Vietnam-era Veteran. He enlisted in the United States Air Force in 1964 and proudly served his country until 1970. Paul dedicated his career to serving and supporting at-risk youth. He held various positions as a counselor, supervisor, athletic director and most fondly as a coach . He was able to help kids in Brockton, Ma, Jacksonville Fl, and throughout Berkshire County, MA. Students would often reach out, years later to thank Paul for having a positive impact on their lives. Paul reconnected with his highschool sweetheart, the former Janet Jensen, whom he married on March, 24, 1990. Paul was a caring, steady and loving stepfather to James Thomas of Pittsfield, MA, Matthew (Heather) Thomas of Jay, VT, and Amy (Matthew) Morin of Attleboro, MA. He is survived by his sister Vicki Petrides of Orange Park, Fl. Paul shared a special bond with his nephew Randy Petrides (Kim) of Mebane, NC and loved him like a son. In addition, Paul leaves behind a half brother Peter A Petrides, stepbrothers David Plausse, Mark Plausse, RobertFortes, a stepsister Roni Lubinsky, their families and numerous cousins. Paul was the family memory keeper and saved newspaper clippings, handmade cards, and old photographs. The most special of these memories were from his grandchildren and great nephews. Paul loved being Grampa to Jeremy, Tabitha, Luke, Maleena, Allison, Jennifer, Daniel, Addilyn and Paislee and Uncle-Paul to his adored great nephews Eben and Jesse. He always treated the kids to donuts when they stayed at the house as he knew it would bring a smile to their faces and was affectionately known as “Donut-man”. Paul loved to play racquetball, tennis, billiards, and cards. Paul taught everyone how to play the card game “Spades” and many exciting games were played with family and friends. He was an avid sports fan who collected sports cards and loved to follow baseball, basketball and football with LeBron James, the NY Giants and the Yankees topping the list. Paul and Jan had many family pets over the years, including Bella, Mooch, Heidi and most recently their sweet cat Gertie. All the animals adored Paul and loved curling up next to him when he was watching a game. Funeral Notice: Funeral services with full military honors for Mr. Paul D. Petrides will be held at a later date. In lieu of flowers, donations can be made to Sonsini Animal Shelter, 875 Crane Ave, Pittsfield, MA in care of the Dwyer Funeral Home, 776 North St., Pittsfield, MA 01201 in his memory. Donations CANNOT be made online, but may be made through the Dwyer Funeral Home.

The family of Mr. Paul D. Petrides created this Life Tributes page to make it easy to share your memories.

Send flowers to the Petrides family.