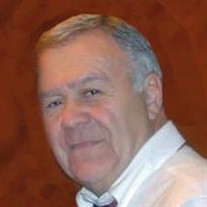 Mr. Paul J. Reeves, of Pittsfield, passed away unexpectedly on Saturday. January 25, 2020. Born in Pittsfield, MA, on June 26, 1941, the son of the late Adelard "Junie" and Rita Martin Reeves, he graduated from St. Joseph High School in 1960. Paul was a Vietnam War veteran. He proudly served his country as a member of the United States Army from 1963 until 1965. He worked at Interprint Inc., for 21 dedicated years, where he was the Quality Control and Laminating Supervisor. Paul was an avid gardener who took immense pride in his yard and home. He was full of energy and happiness and recently said how much heloved "this life". Paul was very proud of his family and grandchildren. He had a unique bond as Peyton and Paige's "Grampi". One of the many things he enjoyed doing for them, was giving them rides during their school years. You could always count on him arriving well before the bell rang and find him napping in the same spot every day. Paul was one of the most knowledgeable sports fans. The Boston Red Sox was his favorite team. Paul was well known for his epic Fourth of July parties and family Christmases. He had a great love for traveling out west to the Grand Canyon, Colorado, and New Hampshire. Paul was predeceased by his beloved wife of 27 years, the former Marilyn C. Brown, whom he married on June 25, 1988. He is survived by his loving and devoted children, Darlene Reeves Williams and Michelle Reeves Rivers (Steven), as well as his step-children, Amy Renaud Mutart (Alan), Karen Renaud Vonberg (Derrick) and Jeffrey Renaud. Paul also leaves behind his brother, Thomas Bradley. He is survived by many dear grandchildren, nieces, and nephews. Paul was also predeceased by his sister, Kathleen Reeves Coffey. Funeral Notice: Funeral services for Mr. Paul J. Reeves will be Friday, January 31, 2020 with a Liturgy of Christian Burial at 10 am at St. Charles Church, celebrated by the Rev. A. Peter Gregory, Pastor Emeritus. Burial will follow in St. Joseph Cemetery. Calling hours will be Thursday, January 30, 2020, from 4 p.m. until 7 p.m. at the Dwyer Funeral Home. In lieu of flowers, donations can be made to the Shriners Hospital for Children in care of the Dwyer Funeral Home, 776 North St., Pittsfield, MA 01201 in his memory. Donations CANNOT be made online, but may be made through the Dwyer Funeral Home.

The family of Mr. Paul J. Reeves created this Life Tributes page to make it easy to share your memories.

Mr. Paul J. Reeves, of Pittsfield, passed away unexpectedly on...

Send flowers to the Reeves family.