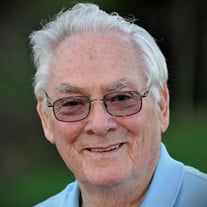 Mr. Paul G. Trembley, 91, of Pittsfield, passed away on Wednesday, February 10, 2021. Born in Pittsfield, MA, May 28, 1929, the son of the late Napoleon and Cecelia Callanan Trembley, he graduated from Pittsfield High School. Paul was a Korean War veteran. He enlisted in the United States Army in 1952, where he proudly served his country until 1954. After his time in the military, he was an active member of the VFW in Pittsfield. He worked as a printer for the Berkshire Eagle for 36 dedicated years, up until his retirement in 1990. Paul also served 30 years as Deputy Sheriff in Pittsfield. Among many things, Paul took great pride in his cars, loved cruising North Street, mowing his lawn, caring for his home and singing with his sisters. He enjoyed Sunday visits with his nieces and nephews and loved all animals. Nothing made him happier than spending time with his children and grandchildren. He will be greatly missed by all who were privileged to know him. Paul is survived by his beloved wife of 72 years, the former Evelyn Kavey, whom he married in Pittsfield on September 25, 1948. He leaves behind his three children, Paul Jr. and wife Carol Trembley of Valencia, CA, Mark and wife Deborah Schilling of Fountain Hills, AZ and Nancy and her husband Richard Robert of Hinsdale, MA. His grandchildren Meagan, Emily, and Lauren; great grandchildren, Caroline and Oliver as well as his sisters, Pauline Moon and Dorothy Bence. Besides his parents, Paul was predeceased by his sisters, Cecelia Berte and Olive Levesque. Funeral Notice: There will be no formal funeral services for Mr. Paul G. Trembley. In lieu of flowers, donations can be made to the Salvation Army in care of the Dwyer Funeral Home, 776 North Street, Pittsfield, MA 01201, in his memory. Donations CANNOT be made online, but may be made through the Dwyer Funeral Home.

Mr. Paul G. Trembley, 91, of Pittsfield, passed away on Wednesday, February 10, 2021. Born in Pittsfield, MA, May 28, 1929, the son of the late Napoleon and Cecelia Callanan Trembley, he graduated from Pittsfield High School. Paul was a Korean... View Obituary & Service Information

The family of Mr. Paul G. Trembley created this Life Tributes page to make it easy to share your memories.

Send flowers to the Trembley family.