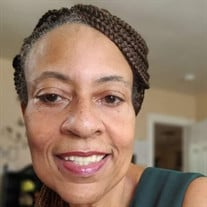 Pauline McHeard passed away November 30, 2021 at the age of 58. Daughter of Fanny Quigley, she graduated from T. C Williams High School in 1981. Pauline dedicated her life to the service of others. She worked as a CNA at Hillcrest Nursing since 2015 and previously as an office manager at Northeast Parent and Child Society. She enjoyed crafting. She worked with her hands whether it was knitting, crocheting, or sewing. She adored making things for the people she loved. Many can recall receiving a pair of exclusive limited edition PJ pants, doll, crochet hat, or a special item made for them. In her heyday, Pauline was the life of the party. You could catch her cutting a rug with her cousin, or friends at the local nightclub or cabaret. Music was in her soul. She later found that to be true in the sanctuary of the church whether singing in choir, ensemble groups with EMBC or leading praise and worship. She considered herself a choir director well before becoming appointed in life. Often, after church and many times before, she would hold impromptu practice with her daughters singing a medley of the family's favorite songs. She had a heart of service and her goal was to lead as many people to love or Christ as she could. She was a critical thinker and would lament about ways to advance into her idea of success. She pushed others to be the best version of themselves sharing advice, sometimes unwarranted but always with well intentions. She would always share her dream of having all of her daughters under one roof to share the love and care of her daughters and grandchildren. She wanted to create the childhood she did not experience. She was committed to growth, teaching, and continued education. She did this by serving for several years across many churches as vacation Bible school teacher, Sunday school teacher, youth group leader, and advocate for summer enrichment programs for youth. Pauline has always been "about the kids" as she would often say. Plenty can recall being invited to family events or holidays. Especially, if you needed love or needed to be surrounded by family. Her extended family consisted of many friends she met along the way that got a bit of her TLC. She is survived by her daughters Danielle Osei, Ashley McHeard, and Deanna McHeard. Her grand daughters, Marley Ryans, Laylah Scott, and Maelani Ryans. Son-in-law, Charles Osei. Siblings Debbie Parker, Kent Andrew McHeard, Kenneth Anthony McHeard, and Lucy Carroll. A host of nieces and nephews, biological and those born in her heart Funeral Notice: Funeral services for Ms. Paulie McHeard will be private.

Pauline McHeard passed away November 30, 2021 at the age of 58. Daughter of Fanny Quigley, she graduated from T. C Williams High School in 1981. Pauline dedicated her life to the service of others. She worked as a CNA at Hillcrest Nursing since... View Obituary & Service Information

The family of Ms. Pauline McHeard created this Life Tributes page to make it easy to share your memories.

Send flowers to the McHeard family.