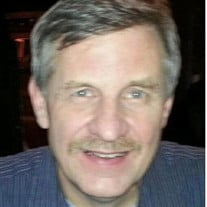 The Nixon family shares, with great sadness, the news that Peter Laurence Nixon died suddenly on February 14, 2021. Peter was born November 2, 1954 at Pittsfield General Hospital to parents Patricia May Nixon and Paul Brendan Nixon. He attended local schools and graduated from Pittsfield High School in 1972. Peter went on to attend Berkshire Community College and then the University of Massachusetts, Amherst, graduating in 1977 with a BS in Environmental Design. Peter started his career working as an architect at local firms. He went on to a 30 year career as principal mechanical engineer at what is now Krofta Technologies, retiring in November of 2020. He was particularly proud of his work designing the Pittsfield Water Filtration System. Peter loved all things mechanical, and loved to tinker even as a boy, eager to figure out how everything worked. Anyone needing something fixed knew Peter was your go-to handyman. His interest in mechanics led to a love of foreign sports cars, from his Triumph TR4 to his coveted Porsche 911S. He was a longtime member of the Berkshire Motor Sports Car Club. Peter had a passion for outdoor pursuits, including biking, both road and mountain, hiking, and skiing. He enjoyed the social aspect of the Berkshire Cycling Association’s Thursday evening rides and challenged himself on an annual cycle up Mt. Greylock. He enjoyed downhill skiing with his sons and brothers in Colorado and Italy, but he always loved skiing locally with his favorite ski partner, his wife. Peter is survived by his wife, Carol Vogler Nixon and his mother, Patrica May Nixon, both of Pittsfield, son Jeffrey Nixon and wife Jocelyn Nixon of Fitchburg, MA, and son Jonathan Nixon and wife Kelsy (Pero) Nixon of Minot, ME. He is also survived by his brothers Timothy Nixon and Christopher Nixon, both living in Colorado, and his cherished grandsons, Calvin and Finn Nixon. Peter was a beloved husband, son, father, brother; he especially loved being Poppy to his grandsons. To say he will be missed by all who were lucky enough to have him in their lives is an understatement. Funeral Notice: A memorial for Peter will be held outdoors later this spring. In lieu of flowers, donations in memory of Peter can be made to the Berkshire Natural Resource Council or Trustees of the Reservation, in care of the Dwyer Funeral Home, 776 North Street, Pittsfield MA 01201. Donations CANNOT be made online, but may be made through the Dwyer Funeral Home.

The family of Mr. Peter L. Nixon created this Life Tributes page to make it easy to share your memories.

The Nixon family shares, with great sadness, the news that Peter...

Send flowers to the Nixon family.