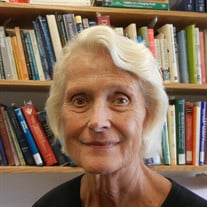 Dr. Phebe K. Cramer, 85, of Williamstown, passed away on Friday, April 2, 2021. The daughter of the late Carl and Edna Winkler Cramer, she was born in San Francisco, CA, and grew up in Oakland, CA. She attended high school at the Anna Head School in Berkeley, CA, and went on to receive a B.A. from the University of California, Berkeley, and a Ph.D. in psychology from New York University. Phebe taught psychology at Barnard College in New York City and the University of California, Berkeley, before joining the faculty of Williams College in 1970, becoming one of the first tenured female professors at the school and the first in the psychology department. A pioneer for gender equality at Williams, she co-founded a committee that fought for and won salary equity and maternity leave for women. In 2009, she retired from teaching and continued her research as professor of psychology, emeritus. During her years at Williams, Phebe published many articles on topics of defense mechanisms, narcissism, and longitudinal personality development. She was the author of five books and more than 80 peer-review papers. In 2014, Phebe received the Bruno Klopfer Distinguished Contribution Award from the Society for Personality Assessment, and in 2018, she received the Henry A. Murray Award for Distinguished Contributions to the Study of Lives from the Association for Research in Personality. In addition to teaching and research, she was active in clinical practice. She completed her clinical internship at Columbia Presbyterian Hospital in New York City and held clinical staff positions at Maimonides Hospital (Brooklyn, NY), Lincoln Institute for Psychotherapy (New York, NY), and Mt. Zion Hospital (San Francisco, CA). After settling in Berkshire County, she held a private practice for much of her career and served as a clinical psychologist for Student Health Services at North Adams State College (1972-80) and chief clinical psychologist for Berkshire Mental Health Clinic (1979-86). Phebe was a life-long learner who enjoyed athletics, art, and travel. Competitive swimming was a major focus during her teenage years and she set 10 American records and one world record in the 100-yard butterfly. Her backstroke took her all the way to the Olympic trials in 1952. Later in life, she became a certified figure skating judge for the United States Figure Skating Association, inspired by the many years of supporting her daughters as they trained in the sport. Phebe discovered her passion for exploring new cultures at age 12, when she visited pre-Castro Cuba with her mother. Her post-retirement travels to Europe, Central and South America, Galapagos Islands, Ghana, Kenya, Tahiti, India, Burma, China, and Mongolia were filled with adventure. Travelling always brought her home to Williamstown, MA, where she enjoyed dinners and Scrabble games with friends, birds on the feeder in her window, and the deer in her backyard. Phebe is survived by her daughter Julia Savacool and her husband Brian Finn of New York City and daughter Mara Savacool Zimmerman and her husband Ramsey Zimmerman of Olympia, WA, and as well as her two grandchildren, Elena and Nicholas Zimmerman. Funeral Notice: At this time, no formal funeral services are planned. In lieu of flowers, donations in her memory can be made to the World Wildlife Fund in care of the Dwyer Funeral Home, 776 North Street, Pittsfield, MA 01201.

Dr. Phebe K. Cramer, 85, of Williamstown, passed away on Friday, April 2, 2021. The daughter of the late Carl and Edna Winkler Cramer, she was born in San Francisco, CA, and grew up in Oakland, CA. She attended high school at the Anna Head School... View Obituary & Service Information

The family of Dr. Phebe K. Cramer created this Life Tributes page to make it easy to share your memories.

Send flowers to the Cramer family.