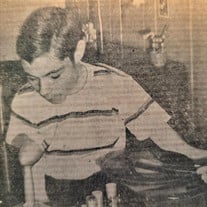 Celebrating the life of Mr. Philip Browning Krause, December 26, 1934 – May 20, 2021 Mr. Philip Browning Krause, 86, of Pittsfield, passed away at his home on Thursday, May 20, 2021, surrounded by his loving family. Born in Springfield, MA on December 26, 1934, he was the son of the late Philip and Arabel Browning Krause. Phil was a curious child with a fascination for electronics. At the age of 14, he purchased a kit from a magazine that advertised “Build Your Own Radio Station.” If assembled correctly, this kit was only intended to entertain within a household. Phil, however, managed to create a devise that broadcasted his bedroom station all throughout Berkshire County and even lofted to New York. The FCC was notified by licensed radio stations and Phil was politely asked to discontinue the broadcast. This adventure, naturally, drew the attention of an international magazine in which they published a nice article detailing Phil’s masterpiece (pictured above). This seed directed Paul toward a career in television. Phil graduated from Pittsfield High School in 1953 and then completed his degree in Electronics from the University of Connecticut. He went on to assist Frank’s TV, Lussier’s TV and Armond’s TV before opening his own business in 1972. Phil’s TV sales and service thrived for over 40 years until his retirement in 2013. After his retirement, he enjoyed a peaceful life in his home in West Pittsfield. Phil’s favorite vacations were the White Mountains of New Hampshire and spending time with his sister, Joanna Peverett, in Kennebunk, Maine. Phil’s legendary Train display was a museum of Lionel accessories, dating back to before WWII. His guests were always invited to see the 26 X 26 foot spectacle with 4 full trains and 2 trollies rolling at once. Phil leaves behind his sister Joanna Peverett, her sons Peter and Michel Peverett, his adopted niece, Corinne Hasty, adopted nephew Wild Bill Knowles and many friends. Phil leaves advice from his experience--"Wear sunblock, Keep the RailRoad Alive, and Thank God for the blessing of life every day" Funeral Notice: Funeral services for Mr. Philip Browning Krause will be Thursday, May 27, 2021, at 11 a.m. at the Unity Terrace at the Dwyer-Wellington Funeral Home, 220 East Street, Pittsfield, MA 01201. Burial will follow at Pittsfield Cemetery. There will be an hour of visitation at the funeral home prior to the service, from 10 a.m. until 11 a.m.. In lieu of flowers, donations can be made HopsiceCare in the Berkshires in care of the Dwyer-Wellington Funeral Home, 220 East Street, Pittsfield, MA 01201. Donations CANNOT be made online, but may be made through the Dwyer-Wellington Funeral Home.

The family of Mr. Philip Browning Krause created this Life Tributes page to make it easy to share your memories.

Send flowers to the Krause family.