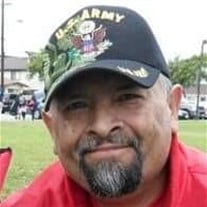 Mr. Ralph Negrette, Jr., 72, of Pittsfield, passed away at home on Monday, October 28, 2019, surrounded by his loving family. He was born in Orange, CA, on May 8, 1947, the son of the late Ralph and Irene Castillo Negrette. Ralph enlisted in the United States Army. He served in the military from 1967 until 1969. It was during this period that Ralph obtained his GED, while also earning a Purple Heart and Bronze Star Award. Mr. Negrette was a machinist for many years. He also owned and operated his own newspaper delivery service for over twenty years. Ralph enjoyed camping and sports. He was especially fond baseball and hockey and could often be found watching The LA Dodgers, and the LA Kings. Ralph was a member of the Disabled American Veterans. Besides his wife, Diane Folan, whom he married on November 23, 1984, Ralph is survived by his children, Josie Chest, Ralph A. Negrette, Carmen Gonzales, and David Booker. He leaves behind his siblings, Eleanor, Gloria, Mollie, Tommy, and Mike, as well as 11 grandchildren. Ralph’s family would like to extend their gratitude to the Pittsfield Office of Veteran Affairs, the staff of 5 West at Berkshire Medical Center, as well as HospiceCare in the Berkshires for all of their loving care and support. Funeral Notice: Funeral services for Mr. Ralph Negrette, Jr. will be held on Saturday, November 2, 2019 with a Liturgy of Christian Burial at 9 am at St. Agnes Church in Dalton with full military honors, celebrated by the Rev. Christopher Malatesta. Calling hours will be held on Friday, November 1, 2019, from 4 p.m. until 6 p.m. at the Dwyer Funeral Home. In lieu of flowers, donations can be made to the Disabled American Veterans in care of the Dwyer Funeral Home, 776 North St., Pittsfield, MA 01201 in his memory. Donations CANNOT be made online, but may be made through the Dwyer Funeral Home.

Mr. Ralph Negrette, Jr., 72, of Pittsfield, passed away at home on Monday, October 28, 2019, surrounded by his loving family. He was born in Orange, CA, on May 8, 1947, the son of the late Ralph and Irene Castillo Negrette. Ralph enlisted in... View Obituary & Service Information

The family of Mr. Ralph Negrette Jr. created this Life Tributes page to make it easy to share your memories.

Send flowers to the Negrette family.