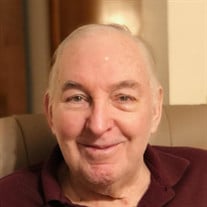 Raymond N. Boudreau,79, died peacefully in his sleep at home on November 6, 2021 after a long period of declining health. He was born October 17, 1942 in Weymouth, MA son of the late Frederick and Lillian (Geever) Boudreau. He attended schools in Weymouth and Rockland. Upon graduating from Rockland High School in 1960, he was accepted into the G.E. Engineering Apprentice Course and moved to Pittsfield. While working in the apprentice program he attended night school at Western New England College, graduating with a Bachelor of Electrical Engineering in 1971. He also served in the Army Reserves from 1965 to 1971. On May 28, 1966, he married his beloved wife of 55 years the former Patricia Shalley of Great Barrington in St Peter’s Church. Ray held many managerial engineering positions throughout the years beginning at General Electric and continuing through the transitions to Martin Marietta, Lockheed Martin and finally retiring from General Dynamics in 2001 as Program Manager of Production Support Engineering in Guidance Production Division. O utside of work, Ray was involved in many civic organizations. He was a member of the Civitan Club of the Berkshires for the last 49 years, serving as president in 1976 and an Honor Key Recipient. He served as Area Coordinator for the Berkshire County Chapter of Special Olympics from 1976 to 1982 and had various Special Olympics events dedicated to him including track & field at both Taconic and Monument Mountain High Schools. He was awarded the 1982 Massachusetts Special Olympics Outstanding Volunteer Award. Additional honors included being a nominee for the G.E. Phillipe award in 1981 and 1982. He was the 1982 Child Advocate of the Year for the Berkshire County Council of Children, the recipient of the 1984 March of Dimes Helping Hand Award and a 1986 Unsung Hero for the City of Pittsfield. He was a member of the GEAA serving as Golf Chairman in 1996 and the Board of Directors from 1998-2006 (Treasurer -1998, President-2002). He helped form and lead the political activist group RATTS for the south side neighborhood group Residents Against the Transfer Station on South St. After retirement he enjoyed golfing at the “A”, his Friday night poker games, monthly trips to Mohegan Sun and Foxwoods. He was an avid Boston sports fan (Red Sox, Patriots, Celtic and Bruins), but his favorite activity was attending his grandchildrens’ extracurricular activities. Besides his wife, he leaves a son Raymond P. Boudreau and two daughters, Suzanne Downer and her husband Daniel of Dalton and Pamela Boudreau and her husband Matthew Farrell of Amherst, his grandchildren, whom he was most proud of, Jamie and Jessie Downer, Madeline Keeler and Lillian Boudreau, his siblings Frederick Boudreau and wife Doretta of S. Weymouth and Walter Boudreau of Brockton, his brother-in-law David Yaffe and many nieces and nephews. In addition to his parents, he was predeceased by his sister Lorraine Bowden and her husband Thomas, his brother Joseph Boudreau, his sisters-in-law Elizabeth “Betty” Chludzinski and her husband Theodore and Maureen Yaffe. FUNERAL NOTICE: Funeral services for Mr. Raymond N. Boudreau will be Saturday, November 13, 2021, with a Liturgy of Christian Burial at 10 a.m. at St. Joseph’s Church, celebrated by Msgr. Michael A. Shershanovich, Pastor. Burial will be private at a later date at St Peter’s Cemetery in Great Barrington. Calling hours will be held, Friday, November 12, 2021, from 4 to 6 p.m. at the Dwyer Funeral Home, 776 North Street, Pittsfield MA. To best ensure everybody’s health, due to the recent rise in Covid cases, all who attend these services will be required to wear face masks. In lieu of flowers, donations may be made in Raymond’s name to St. Luke’s School of Nursing Alumni Association or the Civitan Club of the Berkshires, in care of the Dwyer Funeral Home.

Raymond N. Boudreau,79, died peacefully in his sleep at home on November 6, 2021 after a long period of declining health. He was born October 17, 1942 in Weymouth, MA son of the late Frederick and Lillian (Geever) Boudreau. He attended schools... View Obituary & Service Information

The family of Mr. Raymond N. Boudreau created this Life Tributes page to make it easy to share your memories.

Raymond N. Boudreau,79, died peacefully in his sleep at home...

Send flowers to the Boudreau family.