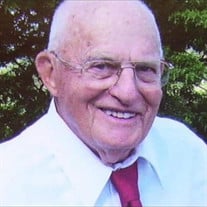 Raymond R. Scace, of Pittsfield, passed away on Friday, March 5, 2021, just three days shy of toasting his 100th birthday. Born in Pittsfield, MA, on March 8, 1921, the son of the late George and Lila Almstead Scace, he was a graduate of Pittsfield High School. Ray was a World War II veteran. He enlisted in the United States Army in February 1943, where he proudly served his country on the European front, until December 1945. He was in the 552nd Anti-Aircraft Artillery Automatic Weapons Battalion, 78th Infantry Division. He loved his country and as a proud American, he would lower his flag each night and raise it each morning, regardless of the weather. He not only worked as a machinist at General Electric for 45 years, he was a dedicated gentleman farmer, tending to his gardens, caring for his animals, haying his fields, and cutting trees for firewood. Age didn’t slow him down; he could still be seen on his tractor until his early 90’s, and was driving his Kubota around his fields at age 99. Ray loved to hunt and fish and always found time to enjoy these hobbies with his family and friends. He shared his love of horses with his children, teaching them to ride and bringing them to compete in Circle K Riding Club events. He enjoyed trail riding on Lenox Mountain, and giving friends and family horse-drawn sleigh rides around his meadows. His favorite thing to do was to spend time with his family. Ray was a gentle and kind soul who touched everyone he met. He would gladly give what little he had to help someone in need. His trust in humanity never wavered and he opened his home, and his heart, to all. Raymond was predeceased by his beloved wife of nearly 60 years, the former Elaine Vosburgh, whom he married on May 1, 1948. Elaine passed away in June 2007. He is survived by his three sons and daughters-in-law, Wayne Scace and Eileen Clawson of Mt. Jackson VA, Daniel and Tamara Scace of Estes Park CO, and Thomas and Kathleen Scace of Pittsfield, MA, as well as his two daughters, Joan Lequin and her husband Daniel of Savoy, MA, and Anne Scace of Pittsfield, MA. Ray also leaves behind 11 grandchildren (Matthew, Sonia, Morgan, Maggie, Justin, Mitchell, Andrew, Nicole, Ryan, James and Katelyn); and 7 great-grandchildren. Funeral Notice: The family of Raymond R. Scace will be holding a private service at this time. A celebration of life with full military honors, will be held at a later date, when Covid restrictions are lifted and all are able to safely gather. In lieu of flowers, donations can be made to Elder Services of the Berkshires in care of the Dwyer Funeral Home, 776 North Street, Pittsfield, MA 01201 in his memory.

Raymond R. Scace, of Pittsfield, passed away on Friday, March 5, 2021, just three days shy of toasting his 100th birthday. Born in Pittsfield, MA, on March 8, 1921, the son of the late George and Lila Almstead Scace, he was a graduate of Pittsfield... View Obituary & Service Information

The family of Mr. Raymond R. Scace created this Life Tributes page to make it easy to share your memories.

Raymond R. Scace, of Pittsfield, passed away on Friday, March...

Send flowers to the Scace family.